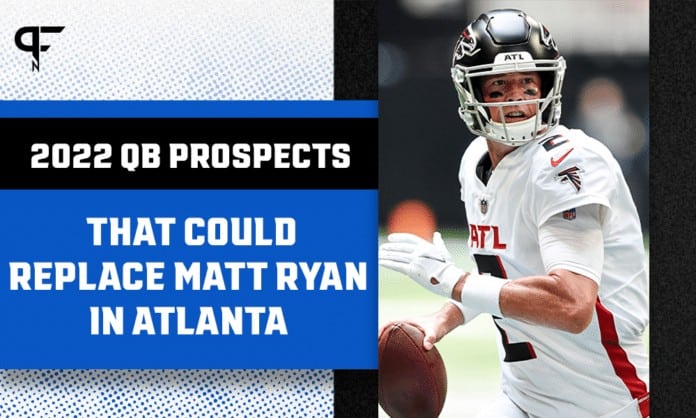 Which 2022 NFL Draft quarterback prospects might be in line to replace Atlanta Falcons signal-caller Matt Ryan? Let's take a look.

NFL teams can never be fixated on the present. Rather, one eye should be on the present and the future. A perfect example of this is the conversation surrounding 2022 NFL Draft quarterback prospects that could replace Atlanta Falcons QB Matt Ryan.

Ryan isn’t a bad quarterback, and he may still have a few quality years left. But at this point, he doesn’t align with the Falcons’ contention window. By the time Atlanta is ready to compete under head coach Arthur Smith, Ryan may be in the twilight of his career. The time is coming to replace Ryan, and it may be prudent for Atlanta to find that replacement in 2022 — so he can learn under Ryan and eventually take the reins.

With future implications in mind, which 2022 NFL Draft quarterback prospects could potentially replace Ryan? Part of it depends on where the Falcons will pick. But there will be options no matter what.

Let’s take a look at some of the 2022 quarterback prospects that could potentially succeed Matt Ryan as the Falcons’ franchise passer. The choice not only depends on where Atlanta picks but also on what Smith wants in his first quarterback selection as a head coach. Does he want continuity, or does he want to add something extra to his offense?

Let’s say the Falcons pick in the top five when the 2022 NFL Draft rolls around. That certainly isn’t out of the question after seeing them play against the Eagles in Week 1. The options are most plentiful in this scenario but also the most daunting. While the 2022 NFL Draft quarterback class isn’t as strong up top as the 2021 class was, it is much deeper. And right now, it’s too early to say who will and won’t be a part of the first-round discussion.

We can start with the usual contenders. Spencer Rattler of Oklahoma is an electric talent with great velocity and arm elasticity. Meanwhile, Sam Howell of North Carolina is a tough, competitive quarterback with above-average physical traits in all categories. Both players are more pocket passers than scramblers, as neither is an elite athlete. But they can move if they need to.

Howell and Rattler are the most recognizable options, but the QB1 race is much deeper than those two.

There’s Carson Strong — a quarterback from Nevada who might draw the most similarities to Ryan. Strong is smart, refined beyond his years, and has a powerful arm on top of his size and polish. There’s also Malik Willis and Matt Corral — both ascending traits-rich quarterbacks. Those two round out the top five at the moment, but there are other names to watch as well.

At the moment, none of these quarterback options command the kind of confidence that Trevor Lawrence or Justin Fields commanded, however. Therefore, if the Falcons don’t love any of these players, they shouldn’t force it. Instead, “Door No. 2” is another legitimate path to follow.

Ryan finished the 2020 season with 4,581 yards, 26 touchdowns, and 11 interceptions. Until we see otherwise in a larger sample size, he hasn’t quite fallen off the cliff yet.

Combine Ryan’s lasting prime with a roster that’s largely devoid of high-end talent, and the Falcons could choose to instead wait until Day 2 and pick a developmental quarterback, much like Tampa Bay did with Kyle Trask last April. Minnesota also followed a similar path with Texas A&M QB Kellen Mond.

Some of the notable quarterbacks in this range consist of Kedon Slovis of USC, Desmond Ridder of Cincinnati, Pitt’s Kenny Pickett, Arizona State’s Jayden Daniels, and Coastal Carolina’s Grayson McCall (if he declares). Ridder, in particular, has the traits to move up if he keeps playing well. With his athleticism and arm strength, Ridder has top-quarterback upside, even if accuracy has been an issue to this point.

There’s also one more sleeper who’s been getting more mock draft buzz, and that’s Kentucky QB Will Levis. Levis is a visible top talent with great athleticism and arm elasticity, and he’s kicked off his 2021 season on a high note. When it’s all said and done, Levis’ deep accuracy might be the best in the class. He can give the Falcons a dynamic downfield element that they might lack a bit after losing Julio Jones.

Which 2022 quarterback prospect fits the Atlanta Falcons the most?

Any question about fit in the modern NFL comes with an asterisk. It’s no longer about how quarterbacks can fit schemes but instead about how schemes can fit quarterbacks. Now, we often see teams pick talented quarterbacks and mold the offense around them later instead of forcing quarterbacks into stringent schemes. Having said this, some options provide more continuity from Ryan, while others present change — but also heightened upside.

As mentioned earlier, Nevada’s Strong might be the guy if Atlanta wants a Ryan-esque quarterback.

Like Ryan, Strong is a big-bodied passer with steady mechanics, quick processing ability, and accuracy to all levels of the field. His ability to do pre-snap work is inspiring, and he also might have a better arm than Ryan did coming out. Strong sometimes gets overzealous when testing downfield windows, and he doesn’t quite have the mobility to withstand a bottom-five offensive line. That’s where the uncertainty lies with familiarity.

In my opinion, Arthur Smith shouldn’t be afraid to mix things up. Drafting an athletic quarterback whose legs are weapons could help unlock more flexibility and dynamic potential in Smith’s offense. Thus, Willis stands out as the best fit.

Willis could ultimately be worth the first overall pick, and he offers the most physical talent in the class. He’s an elite athlete at 6’1″, 215 pounds, and a formidable rushing threat. He also has a rocket arm and has progressed as a passer thus far in 2021.

Willis would add another layer to Smith’s multi-dimensional running scheme while allowing the Falcons to pose a lasting threat through the air. Additionally, with Atlanta’s recent line struggles, having a QB who can evade the pocket, extend plays, and create for himself is imperative. Willis is precisely that kind of quarterback.

Time will yield a more coherent answer for the Atlanta Falcons

As of now, Strong and Willis seem like two of the best fits for the Falcons — for different reasons. Strong can help the Falcons keep doing what they’ve been doing under Ryan — and his ultimate ceiling is similar as a player. Willis, meanwhile, can help Atlanta push the boundaries and unlock a ton of dynamic flexibility and versatility in Smith’s scheme. Willis has more uncertainty, but his integration could be advantageous, especially if he has time to learn from Ryan.

Nevertheless, there are more questions than answers at this point. The QB1 mantle in the 2022 NFL Draft is still very much up for grabs. The Falcons’ eventual draft position also bears discussion. If Atlanta ends up in the top five as expected, they should be in play for these quarterbacks. But what if Ryan catches fire late and wins a few unexpected games?

Then, Smith’s strategy might change. Atlanta could trade up for a quarterback from the middle of Round 1, but a team that’s so devoid of high-level talent across the board might not be so keen to give up draft assets.

Luckily, for Smith and the Falcons, there’s time to think about it. They also have a few more months of the college football season to let play out. As much as we want to have definitive answers about the Falcons’ future at quarterback, a lot of answers naturally come with time.

Only one thing is certain right now. Ryan is aging, and his contention window doesn’t line up with Atlanta’s. There’s no better time to start the transition than right now — before it’s too late.