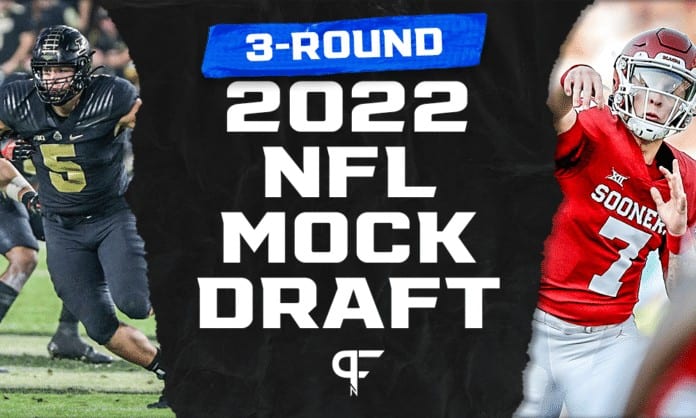 A September 2022 NFL Mock Draft should not be viewed for its accuracy seven months from now. There's an Easter egg in here. Happy hunting!

While looking at 2022 NFL mock drafts in September, it’s not about trying to predict what’s going to happen in seven months accurately. Current mock drafts are more about getting to know the 2022 NFL Draft prospects and deducing what each team needs. Therefore, mock drafts will look drastically different. They’re supposed to be fun, so let’s get started.

NOTE: Draft order is based on Las Vegas win total projections. This mock draft would be pretty silly if we updated it before we get a better sample size.

You won’t see many mock drafts without a quarterback in the top 10. However, in September, no quarterback appears top-10 worthy.

Kayvon Thibodeaux doesn’t need to play to go first overall. We’ve seen all we need to make him a top-five pick. Tyrod Taylor played well in his first game as a Texan, and Houston just spent their first pick of the NFL Draft last season on Davis Mills. They simply didn’t like any of the QBs enough to spend the first pick on one.

The Oregon pass rusher will return, and he will dominate Pac-12 offensive tackles. The problem with this strategy is that if any quarterbacks hit, this pick will be second-guessed on every network television show until the Texans find their future QB.

Like the Texans, the Lions don’t like their options at quarterback. They might not love Jared Goff, but Detroit wants to help their eventual quarterback of the future by building the rest of the team first.

George Karlaftis isn’t the offensive playmaker the Lions need like a diabetic needs insulin, but there aren’t any currently deserving of that draft capital. Instead, they pair Karlaftis with some high-upside interior pass rushers and Romeo Okwara. Building the trenches is an excellent way to build a roster, and Karlaftis has the appetite for devouring some kneecaps.

I’ve made this pick a few times now, but they might be able to go anywhere in the draft after watching this team on Sunday. Now, there’s some talent in Jacksonville, but they grossly underperformed against a Texans team that has no business winning football games.

DeMarvin Leal is an athletic defensive tackle who can do the one thing that can destroy even the best quarterback play — create interior pressure. Texas A&M has some “dogs” this season, and Leal might be the best of the bunch.

Now that we’re here, the Jets don’t feel so far away. I’ve shared all these feelings, and this is my dream for this 2022 NFL Mock Draft. It seems their struggles we thought were in vain all finally started to go away.

This is the time to smile. The New York Jets need more help at cornerback than quite possibly any team needs at any position group. But I think I’m doing okay with Derek Stingley Jr. I’m not ashamed to be the person that takes multiple defensive backs for the team.

I don’t have any creative way to say this. Fix the offensive line or Joe Burrow will not survive his first contract. Now, part of their issue in Week 1 was communication. I’m not privy to who makes the protection calls in Cincinnati. But whoever did it on Sunday did a horrific job.

Additionally, an interior consisting of Xavier Su’a-Filo and Trey Hopkins won’t get it done. And, in the off chance that John Simpson develops into a starter (I liked him coming out, so I hope he can), Kenyon Green is playing his final season with the Aggies at right tackle.

Here he is, the best player in the 2022 NFL Draft class. At least, I’m hoping by the end of 2021, he’ll be considered for the title. The pairing of Jeremy Chinn and Kyle Hamilton would have to make for the largest safety duo in the NFL (don’t fact-check me).

Hamilton is unfair. His hash-to-sideline interception against Florida State was hilarious. Nobody should be that long, strong, and rangy on the back end. With the importance of the safety position in the NFL rising by the minute, it wouldn’t shock me to see him go in the top-three picks, especially with his unlimited versatility.

My colleague, Ian Cummings, has been hot and heavy on the Booth hype train now for a long time. Give an NFL Draft analyst an uber-athletic player with little playing time the year before their draft eligibility, and they’ll talk them up all summer. Many times, consistency is an issue as a full-time player, and the flashes never materialize.

Andrew Booth is one of the players that appear to be breaking that mold. He’ll be at the top of 2022 NFL mock drafts for the foreseeable future if his traits continue to translate to high-level play.

Kaiir Elam is a perfect fit for the Las Vegas Raiders’ Cover 3. At 6-foot-2, 195 pounds, the Florida defensive back has all the length in the world to disrupt the catch point. However, he’s also quite good moving laterally, which is impressive for his elevation.

On the other hand, this could be a proverbial death sentence for the Tallahassee product. The sins of trading away Khalil Mack and Amari Cooper came to roost in the drafts immediately following theirs.

Evan Neal was tagged with “upside” going into the 2021 season. He’s another one that seems to have reached his potential, at least early in the season. In what looks like a poor offensive tackle class, Neal could be a trade-up target come April.

Dave Gettleman has to fix his mistakes. Drafting Andrew Thomas was a bad decision at the time, and the rest of the offensive line is in shambles. It’s not that Thomas was a bad prospect — there were just better prospects left on the board.

The Giants aren’t done on the front line in this 2022 NFL Mock Draft.

I’m not entirely sure where to start with the Atlanta Falcons. They looked utterly pathetic against the Philadelphia Eagles. Ever since Vic Beasley burst onto the scene before disappearing, the Falcons have been devoid of any semblance of a pass rush.

Drake Jackson at least brings hope for a better future in Atlanta, even if they’re a rebuilding team with a quarterback accounting for over $26.9 million against the cap in 2021. Jackson’s draft stock seems to have suppressed a bit compared to Karlaftis and even Michigan’s Aidan Hutchinson, but his game is better suited for the archetype of pass rusher the Falcons like.

Oh, there’s another elite interior offensive lineman playing in a flyover state? Color me shocked. The Giants need so much help on the offensive line that even this isn’t their final stab at improving theirs in 2022.

Tyler Linderbaum finds work better than most offensive linemen we’ve seen in recent years. And, despite his underwhelming frame, he possesses some of the nastiest pancakes in college football.

You’re probably wondering, “Dalton, how the heck is the first quarterback going at 12th overall?” Well, it’s simple — none of the quarterbacks have played consistent enough football to warrant a top-10 selection. Spencer Rattler has the most potential of the group, but we need to see consistency in Big 12 play before we believe in him as a top-five player.

If Washington is picking this high, it’s because their quarterback play was putrid. The offense has weapons, and the offensive line should be good enough to survive. Defensively, they have some of the best talents in the league. But it’s a QB-driven league, and now, the Football Team has theirs.

But the Cardinals already have Hopkins, Green, Kirk, Isabella, and Moore. Certainly, they don’t need another wide receiver, right?

Actually, they do. Or at least, they might. A.J. Green doesn’t appear to be “it” anymore. Christian Kirk is in the final year of his deal and might price himself out of Arizona if the team stops trying to force-feed Green in favor of Kirk.

Chris Olave is the new mold of WR1. There is no route he cannot run. His flexibility and speed allow him to carry speed in and out of breaks, which allows him to easily and consistently get open.

Admittedly, this pick could be a wash if Dan Moore Jr. continues to play well. I’m not a fan of forcing position switches on the offensive line, but I am a fan of drafting good players. That’s what the Steelers would be doing if they took Sean Rhyan 14th overall.

Chukwuma Okorafor probably isn’t the long-term answer at right tackle. The team could very well go quarterback with this pick if they feel Ben Roethlisberger is nearing his end. However, we won’t know that until we see how the season plays out.

Finally, we have the second quarterback taken in this 2022 NFL Mock Draft. Malik Willis is an unbelievable physical talent. His arm is electric, and his feet can shock you, too. Teddy Bridgewater can get the job done with the team they’ve surrounded him with. However, Willis has the ability to elevate a team around him.

The best part is Bridgewater can live up to the first part of his surname while Willis develops.

The start to Aidan Hutchinson‘s season has been outrageous. The Michigan defensive end already has 3.5 sacks in just two outings so far. The Vikings have a big need opposite Danielle Hunter. At 6-foot-6, 260 pounds, Hutchinson could be a great complement opposite the Vikings’ star pass rusher.