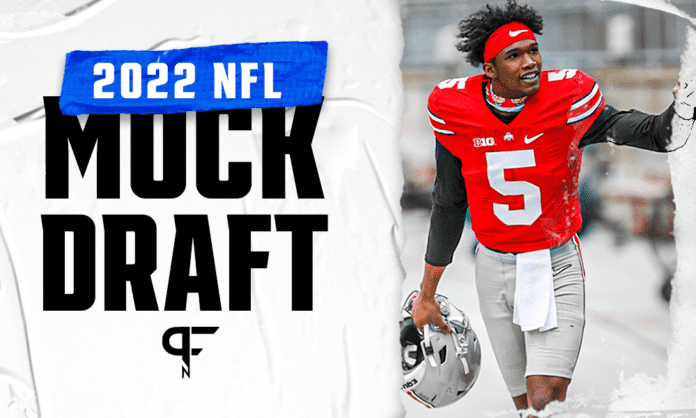 Five quarterbacks are drafted on Day 1, with another two hearing their names called in Round 2 of this 2022 NFL Mock Draft.

While trying to predict the 2022 NFL Draft this early is a fruitless task, conducting a mock draft offers practice in team building. Additionally, this 2022 NFL Mock Draft provides prospects to watch for during the 2021 college football season. Not just the big names either, as quite a few players are largely projections entering the new year. So, who would I pick in your favorite team’s shoes?

This 2-Round 2022 NFL Mock Draft uses current Vegas Super Bowl odds for the 2021 NFL season to determine the order.

Big 12 powerhouse — and soon-to-be SEC competitor — Oklahoma continues to produce top-tier quarterback prospects with Lincoln Riley at the helm. Spencer Rattler always had the potential, and he began to showcase it as the 2020 season progressed. If that progression carries over and Rattler reaches his potential, the Sooners should be vying for a national championship.

While I believe Rattler is the top QB prospect, the gap between him and Sam Howell is far smaller than the one between Howell and the third-best signal-caller. Howell has already proven worthy of this selection, but with his top two running backs and receivers gone, his production will likely fall this season.

The argument is there for Kaiir Elam to be the first cornerback off the board, but Derek Stingley simply has all the tools. His height-weight-speed combination is unmatched. His 2019 tape feels like an eternity ago due to an injury-riddled 2020 campaign. Still, Stingley possesses the lockdown capability to be a No. 1 corner.

In this 2022 NFL Mock Draft, the Jets sit at fourth overall and select quite possibly the best player in the draft with Kayvon Thibodeaux. At 6’5″ and 250 pounds, he owns the ideal position to dominate off the edge. In just 20 career games entering his true junior season, Thibodeaux has amassed 23.5 tackles for loss, 12 sacks, and 6 pass deflections.

Everyone clamored over Deonte Brown’s size on the Alabama offensive line last year. However, Evan Neal is even bigger. At 6’7″ and 360 pounds, Neal is three inches and 10 pounds larger than his former Alabama teammate. Yet, he moves with the agility of a much smaller prospect. Having played left guard, right tackle, and presumably left tackle in 2021, Neal offers immense versatility along a struggling offensive line.

Kaiir Elam has the frame and physicality to play in the NFL and cause problems for opposing offenses. While Stingley earned all the national attention as a true freshman, Elam quietly put on a show for the Gators in a limited role. Entering his third year at the college level, don’t be surprised if Elam takes his game to the next level.

You can swap the Giants two first-round selections in this 2022 NFL Mock Draft. However, there is no guaranteeing Kenyon Green would be available just three picks later. Green made massive improvements from his freshman to sophomore campaigns. He began his Aggies’ career as a left guard, then shifted over to right guard in 2020. He possesses the athleticism, length, and size to kick out to tackle this season, and he’ll likely stay there in the NFL.

The only thing “dropping” Kyle Hamilton to eighth overall in this 2022 NFL Mock Draft is his position. The value of safety in the first round is questionable, but Hamilton is worthy of a top-10 pick. With the size of a box safety or linebacker (6’4″ and 220 pounds) and elite coverage ability, Hamilton is the antithesis of scheme-dependant. Moreover, his instincts would already be among the NFL’s top safeties.

If the Panthers are picking ninth overall, as they do in this 2022 NFL Mock Draft, the Sam Darnold experiment failed. Thus, Carolina drafts the second coming of Cam Newton. No, not in size or physicality, but Liberty’s Malik Willis has the arm and legs to rival Newton’s. The only thing holding Willis back are sloppy plays and turnovers. If he reels those in and becomes more disciplined, the sky is the limit.

Entering his fourth year, the Giants pull the plug on Daniel Jones. As a result, the G-Men look to right the ship with the signal-caller from USC. For Kedon Slovis to garner a top-10 selection, he will have to play much more consistently in 2021. Still, the talent and accuracy are there; it just has to be realized.

Similar to Darnold and Jones, Drew Lock’s opportunity has come and passed, opening the door for Denver’s next attempt at drafting a competent QB. This time, they swing for the fences with Nevada’s Carson Strong. Strong would instantly battle John Elway for the biggest arm in Denver. With stellar mechanics and an upward career trajectory, Strong could answer the Broncos’ QB woes.

There is only one defensive tackle currently deserving of a first-round pick — DeMarvin Leal. He has flashed the ability to play both on the edge and the interior of Texas A&M’s defensive line. Due to his twitch, power, and length, Leal can be a three-down disruptor in the league.

This cornerback class is going to go down as one of the best in recruiting history. Like Stingley and Elam before him, Ahmad Gardner shined as a true freshman. Although he needs to add weight (listed at 188 pounds), the 6’2″ playmaker can match and mirror with anyone in man coverage. Gardner needs to reign in his grabbiness, but “Sauce” already owns the swagger and skill set to shut down one side of the field.

Jaxson Kirkland is a redshirt senior who has only made four career starts at tackle (25 at guard). Yet, his four starts at tackle last year were enough to warrant a high draft pick. He was exceptional in pass protection and was not too shabby as a run blocker. Kirkland isn’t the best athlete at the position, but his balance and footwork are among the best.

I love Cameron Dantzler, but he needs a running mate in Minnesota. So, the Vikings get him one in Andrew Booth Jr. in this 2022 NFL Mock Draft. Another 2019 recruit, Booth has generated highlight plays, but we have not seen enough reps. He has played in 14 games, with many coming in the limited-role variety. With an entire season of starts, Booth could propel up draft boards.

In just eight games last year, Garrett Wilson totaled 723 yards and 6 touchdowns off 43 receptions. There isn’t much he can’t do. Wilson has speed, solid hands, excellent route running, and impressive body control. Sure, he is a little undersized (6’0″ and 188 pounds), but the effortlessness to his game makes for an awe-inspiring watch.