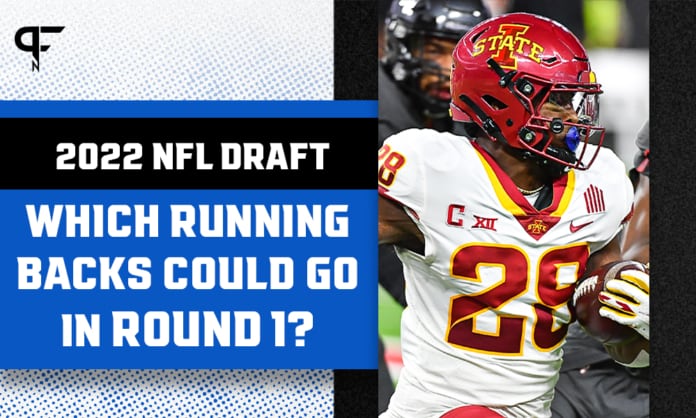 When it comes to 2022 NFL Draft prospects, it's hard to project running backs in Round 1. Who's most likely to go on Day 1 next April?

The “running backs don’t matter” movement was gaining steam, and then two running backs — Najee Harris and Travis Etienne — went in the first round of the 2021 NFL Draft. Whether we agree with it or not, NFL teams still value running backs in Round 1. There are always prospects who command early attention. Let’s examine the running back group for the 2022 NFL Draft and those with Day 1 potential.

Potential first-round running back prospects in the 2022 NFL Draft

Running back is a relatively replaceable position that includes a host of different skill sets. Because running back success is often more dependent on the offensive line, it’s often viewed as a luxury pick early on, especially for teams with other pressing needs.

Nevertheless, the two teams that picked running backs in the 2021 NFL Draft — Pittsburgh and Jacksonville — had pressing needs outside of running back. And yet, they still went with the best players on their board. Running backs can still be valued highly in the modern NFL. But unique traits, such as creation capacity, contact balance, and natural receiving ability, are often sought out in the run game.

With this in mind, which 2022 NFL Draft running back prospects might break into Round 1 next April? These backs often must have the individual ability to potentially transcend their surroundings. Do any qualify for that distinction in the upcoming class?

Isaiah Spiller and Breece Hall are the initial favorites

Heading into the 2021 college football season, there were two favorites at the top of the running back big board. Although some lists vary, many had Texas A&M running back Isaiah Spiller and Breece Hall of Iowa State near the front.

Spiller and Hall returned as two of the most productive college football running backs, eligibility notwithstanding. Spiller was coming off a 2020 season that saw him put up 1,036 yards and 9 touchdowns on 188 carries. Meanwhile, Hall was a fringe Heisman candidate, with 1,572 yards, 5.6 yards per carry, and 21 touchdowns on the ground.

As their production implies, both Spiller and Hall have starting potential at the NFL level. It simply depends on what style running back you prefer. Spiller has about 10 pounds on Hall, and it shows up on film. He is more physical, with better contact balance, and he also has stellar short-area quickness. Hall, meanwhile, wins with stellar vision, explosiveness, agility, and long speed once he hits the open field.

While Hall and Spiller are both solid backs, neither has the elite first-round profile that Harris had. There are some other issues, such as Hall’s lack of elite contact balance. But the lack of elite receiving ability also spells doubt. Although both backs have flashed in that area, neither is the receiving X-factor that Harris was.

High-end versatility as a pass catcher is becoming an increasingly important factor for running backs going in the first round. That’s what made Clyde Edwards-Helaire the first RB off the board in 2020, and both Harris and Etienne had elite potential in the passing game. Seeing Hall and Spiller lack in that area to this point, the question naturally arises — do other RBs have more proven ability catching the football?

There are indeed running backs with more proven receiving ability beyond Hall and Spiller, but for many of these running backs, there are questions regarding whether or not they can be workhorses. That’s another factor that teams consider heavily in Round 1. Can they take on an increased workload and thrive?

Three backs that stand out as exceptional receivers include Oklahoma’s Eric Gray, Notre Dame’s Kyren Williams, and Oregon’s CJ Verdell. Verdell and Williams are both explosive backs but are also 5’9″ or smaller. Verdell is more dense, measuring around 211 pounds, and he does have visible contact balance. However, his limited creation ability likely caps his stock in the Day 2 range.

Williams has the opposite problem. He’s a great creator who’s shown a ton of receiving upside this year. Yet, his contact balance is a question. He’s shown flashes, but he has yet to string together consistency as a runner this year. Eric Gray has shown more in that department, but he’s on the smaller side like Williams.

We’ve already established that most first-round running backs need to have a certain size or density to be considered that high unless they’re elite at creating space for themselves.

This doesn’t mean that smaller running backs can’t go on to produce in premier roles. It’s simply an observation that NFL teams tend to prefer those bigger, more well-rounded backs early on. Harris was a well-documented 6’1″, 232 pounds. Even Etienne was exceptionally dense, at 5’10”, 215 pounds. Are there rising running back prospects who check this box in the 2022 NFL Draft?

A few names that come to mind include Kenneth Walker III of Michigan State, Zonovan Knight of NC State, Tyler Allgeier of BYU, and Zach Charbonnet of UCLA. All four of these backs are 210 pounds or heavier, bring promising traits in the workhorse mold, and possess excellent contact balance.

Walker and Knight, in particular, have very good short-range explosiveness to go with their density. Allgeier and Charbonnet aren’t as naturally agile, but Allgeier still derives good elusiveness from his fast play pace and energy. Charbonnet, meanwhile, is a freight train when he has a runway to build up speed. Allgeier and Charbonnet bring good vision and decisiveness as well — tools that help them maximize their traits.

Ironically, for this group, the overarching concern is receiving ability. Allgeier has shown flashes, but all four backs have tiny sample sizes. Like size for the previous group, receiving ability might preclude them from Round 1 if things don’t improve.

Other 2022 NFL Draft running back prospects to watch

We’ve gone over most of the names that deserve credence in the early-round conversation, but there are more that have buzz across the landscape. Early on in the process, there were fans of Georgia’s Zamir White and Ohio State’s Master Teague, with school prestige likely playing a part. Having watched White, I’m not as high on the Georgia back. His hips are visibly stiff, and he’s also not overly explosive. At the same time, Teague has been buried on Ohio State’s depth chart and is more likely a Day 3 pick.

Iowa’s Tyler Goodson is another name to keep in the memory banks. He benefits from a strong offensive line, but Goodson has great elusiveness, balance, and creation ability. He also has the explosiveness and speed to extend space, and he’s shown ability as a receiver. If Goodson can continue his standout 2021 campaign, he has a promising profile as an early-round sleeper. He’s listed at 5’10”, 199 pounds, so getting over 200 will be big for him.

Among others, Jerrion Ealy, James Cook, Tyler Badie, and Ainias Smith also deserve recognition. But Smith is more likely to be a wide receiver at the next level, and the other three don’t quite have the size to command first-round attention.

If you’re working on a new mock draft and you’re struggling to decide which running back to pick in Round 1, don’t get hung up on any particular names. There are a lot of candidates for Round 1 spots right now outside of a few runaway favorites. Pass-protection ability can serve as a tiebreaker, but as it stands, the offensive value provided is very much in flux.

Spiller is likely the top dog after Hall’s slow start to the year, but even Spiller has questions that may keep him in the Day 2 range. In Week 2, however, Spiller showed promise as a receiver. If he keeps producing through the air, that could be what officially sets him apart. He already has the size, burst, and contact balance, so he fits the workhorse profile.

Beyond Spiller, things get murky. Hall has struggled to match his 2020 efficiency. Williams compares favorably to Austin Ekeler, but he still needs to show more consistent contact balance at 199 pounds. Like Verdell, Allgeier, and Charbonnet, others don’t quite have the creation capacity that Round 1 backs typically own.

While Spiller is in the lead, no running back has the dominant first-round profile of Harris or Etienne just yet. Even so, it’s still early, and there’s time left in the season for running backs to keep filling out their scouting reports. And even if the class doesn’t look as strong on the surface come April, there are always teams who are willing to reach on a luxury for players they especially like.