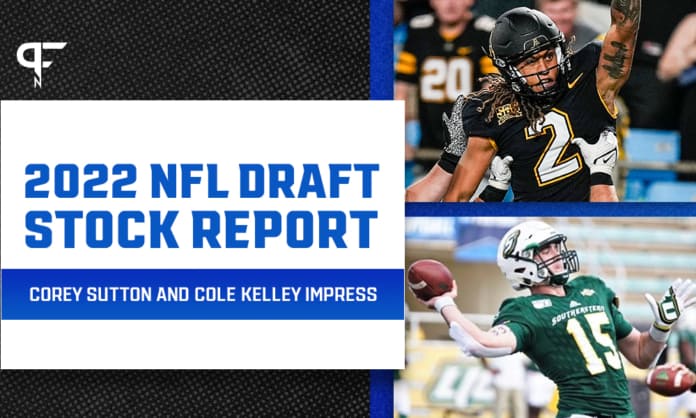 PFN Chief Draft Analyst Tony Pauline looks at the risers and sliders from Week 5 of college football in the 2022 NFL Draft stock report.

Week 5 on the college schedule witnessed two surprising upsets. Oregon was asleep at the wheel during their loss to Stanford while Cincinnati led Notre Dame from the get-go and never looked back. On the field, a variety of defensive NFL Draft prospects stood out. Yet, it’s a massive offensive tackle who leads this week’s group. Here is a look at which prospects changed their fate the most in the 2022 NFL Draft stock report with Week 5’s Risers & Sliders.

Whose draft stock rose the most in Week 5 of the college football season?

Scouts had high expectations for Faalele this season despite the fact the massive tackle opted out of 2020. So far, so good — Faalele has shown a lot of progress in 2021.

He consistently won his matchups on Saturday against Purdue’s George Karlaftis, a consensus first-round prospect. Faalele quickly got into blocks and controlled Karlaftis, out-positioning the defensive end from the action almost every time they met head-on.

Faalele is a rare combination of size (6-feet-8.5-inches, 370 pounds) and athleticism. He moves around the field like a zone-blocking guard rather than a man pushing 400 pounds. While his size will turn some teams off, more will embrace Faalele’s gigantism and upside on Day 2 of the 2022 NFL Draft.

When the conversation turns to the topic of next-level cornerback prospects from Cincinnati, the name Ahmad Gardner is usually the one uttered. Here’s a recommendation — don’t sleep on Bryant.

Another shutdown corner in the UC secondary, Bryant registered 7 tackles and broke up 3 passes against Notre Dame. That’s 6 pass breakups in four games for the senior. Bryant has excellent size and plays with great wherewithal and a physical yet disciplined style. He’s a Day 3 pick that will be a natural nickel back in either zone or man coverage.

I was shocked when scouts told me they had Wyatt graded as a late Day 3 pick, three to four rounds later than the grade I assigned the senior. Wyatt justified my third-round grade against Arkansas — he was a play-making force on Georgia’s defensive line, which was dominant all game.

Wyatt finished the contest with a team-leading 6 tackles, 1.5 tackles for loss, and another 1.5 sacks. It was far and away Wyatt’s best game this season, showing his patented quickness off the snap and relentless style. Wyatt plays like a 3-technique tackle but measures 6-foot-2.5-inches, 310 pounds, and offers position versatility for the next level.

The Cougars’ Payton Turner made a mad dash up draft boards earlier this year and ended up in the first round. Could his former teammate follow suit? Probably not, but Hall is likely to be drafted much earlier than most presently predict.

The athletic defender has lined up at both tackle and end and displays the ability to rush the passer from each spot. Against Tulsa, he finished with a team-leading 1.5 sacks and 1.5 TFLs. Hall is very long with outstanding growth potential and a lot of upside.

Taylor is a player I’ve been high on the past three seasons. While scouts tell me he’s a priority free agent, I’ve graded Taylor as draftable since his sophomore season. Measuring 6-feet-4.5-inches and 230 pounds, he plays fast, explosive football. He was a major factor during the Cavaliers’ victory over Miami, finishing with 6 tackles, 1 TFL, and 1 sack.

In five games, Taylor has a team-leading 3.5 sacks, but he’s much more than a one-dimensional pass rusher. Taylor flies around the field, shows ability in pursuit, and makes a lot of plays in space. I presently grade the senior as a sixth-round prospect.

The Wolf Pack defeated conference foe Boise State 41-31 in one of the most important victories in program history. Quarterback Carson Strong was good, yet tight end Cole Turner was better. The athletic senior finished with 6 receptions for 67 yards and 1 TD.

Earlier this season, Turner posted 7 receptions for 75 yards during the victory over Cal. He’s a tall pass catcher who swiftly moves his 6-foot-6.5-inch, 235-pound frame around the field. Turner is a “move” tight end with the growth potential to develop into a starter in the NFL.

Sutton was well-thought-of entering the 2020 season before he chose to opt out. He returned this year, and his play has not missed a beat. His latest gem was 4 receptions, 106 receiving yards, and 1 TD against Georgia State. This comes on the heels of 10-127-1 the prior week against Marshall.

Sutton offers decent size, reliable hands, and potential as a return specialist. He’s a Day 3 selection whose ultimate draft spot will be determined by testing results next March.

I gave Kelley a PFA (preferred free agent) grade moving towards the 2021 NFL Draft before the strong-armed passer decided to return to college. Thus far, his decision has been beneficial. In four games, Kelley has passed for 1,593 yards and 13 TDs, and he’s completing more than 74% of his throws.

A classic pocket passer with enough arm talent to make all the throws, Kelley stands 6-feet-7-inches and 240 pounds. He is an oddity in the day and age of RPO quarterbacks. Yet, Kelley’s size, arm strength, and ability to easily deliver deep throws are enticing.

Not every prospect rises through the ranks — who slid down in Week 5?

Coan was graded as a potential late-round pick entering the season, but he’s likely to be on the outside looking in when the draft rolls around next April. He possesses next-level size and arm strength put Coan is an erratic passer who struggles to find consistency. In each of the past two weeks, Notre Dame’s offense moved more efficiently after the backup signal-caller replaced Coan.