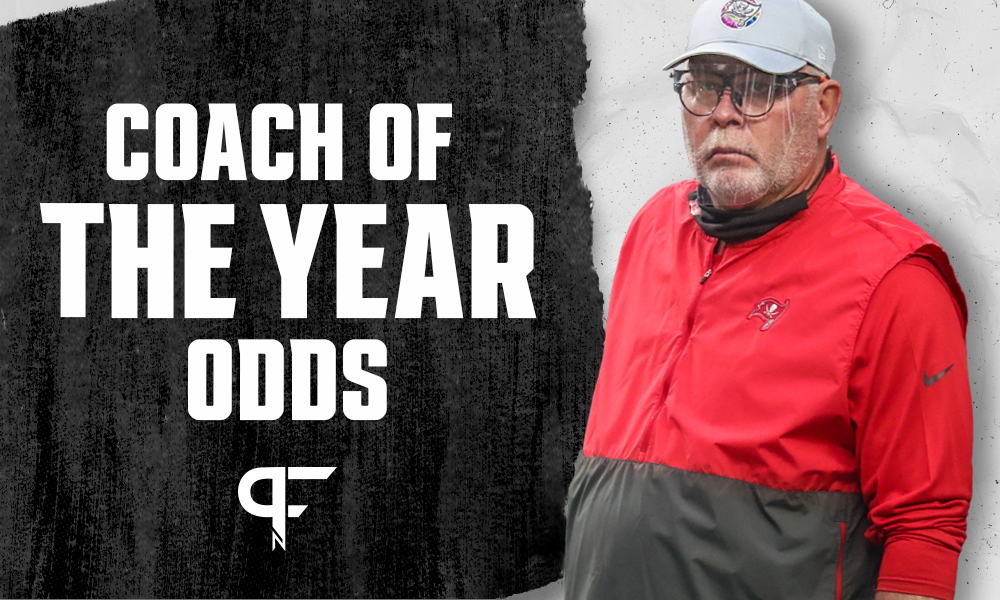 The 2021 NFL Coach of the Year award has a lot of intriguing candidates. With a number of new head coaches on the scene and a lot of teams looking to bounce back, let’s take a look at the odds as well as some picks and predictions when it comes to the coach of the year in the 2021 NFL season.

The current odds below for the NFL Coach of the Year were found at Sports Betting Dime.

Which odds stand out as potential value when it comes to the 2021 NFL Coach of the Year award?

Coming off the disaster that was Freddie Kitchens, Kevin Stefanski could only look good as the head coach of the Browns in 2020. Entering the season projected to win 8.5 games, the Browns won a total of 11. Finishing 2.5 wins above expectation was among the best in the NFL last season and earned Stefanski the Coach of the Year Award.

Still, things are somewhat different this year. The Browns are projected to win 9.5 games, meaning they need to get to 12 wins to outperform projections significantly. Now, with an extra game, that might not be all that difficult.

In PFN’s recent power rankings, we placed the Browns as a top-five team, highlighting how expectations changed. Stefanski will need to go above and beyond to repeat as Coach of the Year, which seems unlikely. No one has won the award twice since Joe Gibbs in 1982 and 1983.

Finishing with 10 wins, Brian Flores had a shot at winning NFL Coach of the Year in 2020. It’s possible that a brutal Week 17 loss, plus question marks over his handling of the Tua Tagovailoa situation, ended his hopes of taking home the crown.

Expectations are somewhat higher for the Dolphins in 2021. After being projected to win just six games last year, their 2021 win total is set at nine.

Nevertheless, the perception of them is that they are a team with questions to answer. In Pro Football Network’s recent 2021 power rankings, the Dolphins ranked 18th. That ranking reflects the concerns facing this team on both sides of the ball.

If Flores can get the Dolphins to 11 or 12 wins, he has a great chance to take home the award in 2021. If he can also get Tua playing like a star, he will be almost guaranteed to be NFL Coach of the Year in 2021.

The feeling around the New England Patriots is that they are a fading force following the departure of Tom Brady. A tough 7-9 campaign in 2020 has left questions about head coach Bill Belichick. However, Belichick can silence all the doubters with a strong 2021 season.

Cam Newton will be in his second year with the offense, and hopefully, COVID-19 free. The defense is returning key players who opted out last year. On top of that, the Patriots reinforced their offensive weaponry in free agency. If it all comes together, Belichick could very well take home his Coach of the Year award and his first since 2010.

Speaking of fading forces, the verdict on Carson Wentz is close to being given. Yet, a trade to link up with his old offensive coordinator in Frank Reich could be just what Wentz needs. The Colts were favorites to win the AFC South in many places before the Julio Jones trade, so Reich will need to take this team to new heights this year.

With the 14th easiest schedule according to our strength of schedule rankings, the Colts will have to work hard. At any rate, winning the AFC South and revitalizing Wentz’s career could be enough to put Reich in the frame for NFL Coach of the Year in 2021.

Andy Reid has not won the NFL Coach of the Year award since 2002. Take a second to let that sink in, especially regarding how the Kansas City Chiefs have performed since hiring Reid. They have won 10 or more games in seven of eight seasons and have never finished below 9-7.

The issue for Reid is that the Chiefs almost need to go unbeaten for him to win the award. In 2020, they went 14-2, only losing one regular-season game with Patrick Mahomes under center. With the Chiefs projected to win 12 games this year, they need to win 16 or 17 games to give Reid a real chance of taking home the award.

The Chiefs have a middle-of-the-road schedule and could push for a 15-17 win season. With Reid available at +2500 to win Coach of the Year and the Chiefs at around +3300 to go unbeaten, both could be intriguing lines to consider this year.

While Mike McCarthy is a favorite to be the first coach fired, there could be value in him as a potential 2021 NFL Coach of the Year candidate. In his first season as head coach, the defense was a disaster, and he lost his starting QB in Week 5.

With a new defensive coordinator and Dak Prescott back at the helm, McCarthy is an interesting candidate to win Coach of the Year.

The Cowboys have the second easiest schedule in the league, a loaded offense, and a defense that has been reinforced. If McCarthy can coach this team to a 12 or even 13-win season in a division full of teams with unknowns, he would have a great chance of taking home the award.

Another coach who is among the favorites to be the first fired is Zac Taylor. Yet, he stands in an intriguing position entering his third year in charge. With Joe Burrow returning, a new weapon on offense, and a defense that showed flashes last year, the Bengals could be a surprise team in 2021.

Projected to win just 6.5 games, Taylor could put himself in the reckoning if the Bengals can win 9 or 10 games and be in the playoff picture. While a bold prediction among picks for 2021 NFL Coach of the Year, the odds make for mouth-watering potential.