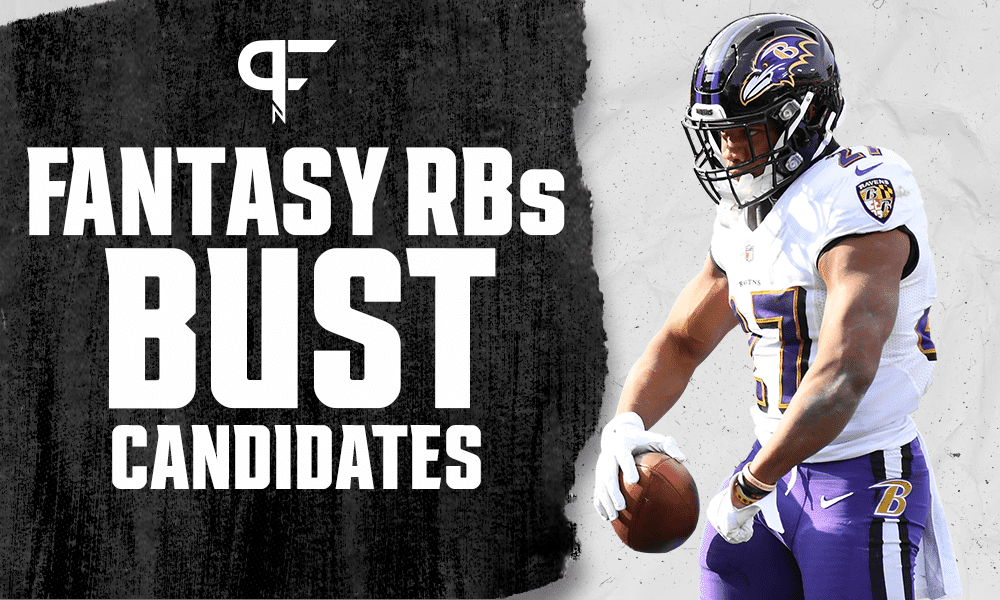 Heading into the 2021 fantasy football season, which RBs are potential bust candidates that you should be wary of during fantasy drafts?

A key element of any fantasy football season is avoiding those players who have the potential to be busts, especially at the RB position. While injuries and shifts in usage can change things quickly, identifying which players could end up not being worth their current average draft positions (ADP) is a crucial part of preparing for fantasy football drafts. Let’s take a look at which RBs stand out as potential busts in the 2021 fantasy football season.

Which running backs from the AFC stand out as potential busts in 2021?

The difference in ADP between J.K. Dobbins and his teammate Gus Edwards is extremely confusing. Edwards ADP of 139.7 saw him named as one of our 2021 RB sleepers, but correspondingly, Dobbins has the potential to be a bust for the same reason.

The problem for Dobbins is whether he will get enough touches to finish the season as a top-15 RB. That seems a baffling thing to say about the lead RB for the team that has the most rushing attempts in each of the last two seasons.

However, the situation in the Ravens’ backfield is complex. Over the past two seasons, Lamar Jackson has averaged 167.5 rushing attempts. Edwards has also averaged 138.5 rushing attempts per season. Even if those two just match their average, that is 306 carries being taken away in the Ravens’ backfield. Additionally, the Ravens have had a third back take another 60 carries on average from the lead back. Suddenly, you are looking at just 200 carries being available to the RB1 in the offense.

When that is the case, you need them to be extremely efficient, which Dobbins was last year. He averaged 6.1 yards per touch on 152 touches, with 9 touchdowns. That was good enough for an RB17 finish.

Is there a chance he could do that again in 2021? Absolutely. However, Dobbins scored 7 rushing touchdowns on just 8 carries inside the five-yard line. That efficiency will be tough to match — and if it drops, finishing as a top-15 RB on just 220 touches could be extremely difficult.

Dobbins is a very good running back, but right now, his cost is too close to his ceiling. That concern highlights him as a potential bust candidate in the 2021 fantasy football season.

Judging the roles of rookie running backs is extremely difficult. Last year, we saw Jonathan Taylor, James Robinson, and Dobbins have success as rookies. Even D’Andre Swift finished as a top-20 back despite a mixed start to the season.

The key in those situations is that there was a lack of high-end competition for touches. Swift had the most challenging situation, competing with Adrian Peterson and Kerryon Johnson. Yet, neither of those are the same caliber of RB right now that Melvin Gordon is.

That is the concern for Javonte Williams and why he could be a fantasy football bust at the RB position in 2021. Gordon dominated the running back opportunities in Denver last year. Of the 442 carries, Gordon recorded 215, with Phillip Lindsay second at 118.

If we also look at touches in the passing game, Gordon dominated there as well, with 44 targets compared to Lindsay’s 14 and Royce Freeman’s 13. While Gordon finished as the RB13, Lindsay finished 61st and Freeman 89th.

Williams is arguably a more talented back, but he could experience the same issues regarding touches. Gordon is entering the final year of his current deal, which means the Broncos will likely be willing to use him heavily.

In contrast, Denver will have Williams on a relatively cheap contract until 2024. Therefore, it would not be a surprise to see Williams used sparingly while Gordon is healthy and performing. Williams has top-15 potential if something happens to Gordon, but there are better uses of a sixth-round selection than a gamble on Williams.

Which running backs from the NFC stand out as potential busts in 2021?

There is no denying that Leonard Fournette had a strong finish to the 2020 season. In the playoffs, he carried the ball 64 times for 300 yards and 3 touchdowns. Still, in those four games, he generated around 40% of his entire year’s production. During the season itself, Fournette had 97 carries for 367 yards and 6 touchdowns. Three of those scores and 28 of the carries came in the final three contests of the year.

The problem for Fournette is the lack of a definitive situation. The Buccaneers currently have Ronald Jones and Ke’Shawn Vaughn on the roster for 2021. They also added Giovani Bernard as a free agent this offseason. While Bernard could end up being a non-factor — like LeSean McCoy was in 2020 — he could see significant third-down usage. That could eat into the role of Fournette, who saw 47 targets during the 2021 regular season.

Trusting Fournette to be a regular contributor on a week-by-week basis is scary. Among the names being drafted after him are Mike Davis, Damien Harris, and Gus Edwards. All three of those present a better value than Fournette. Using a sixth-round selection on a player with uncertain playing time is too rich. In a similar region, you can target WRs such as Brandon Aiyuk, D.J. Chark, Courtland Sutton, and Tee Higgins.

Players like Fournette and Williams are potential targets if you are trying a zero RB strategy. However, both present significant risks if their playing time does not materialize.