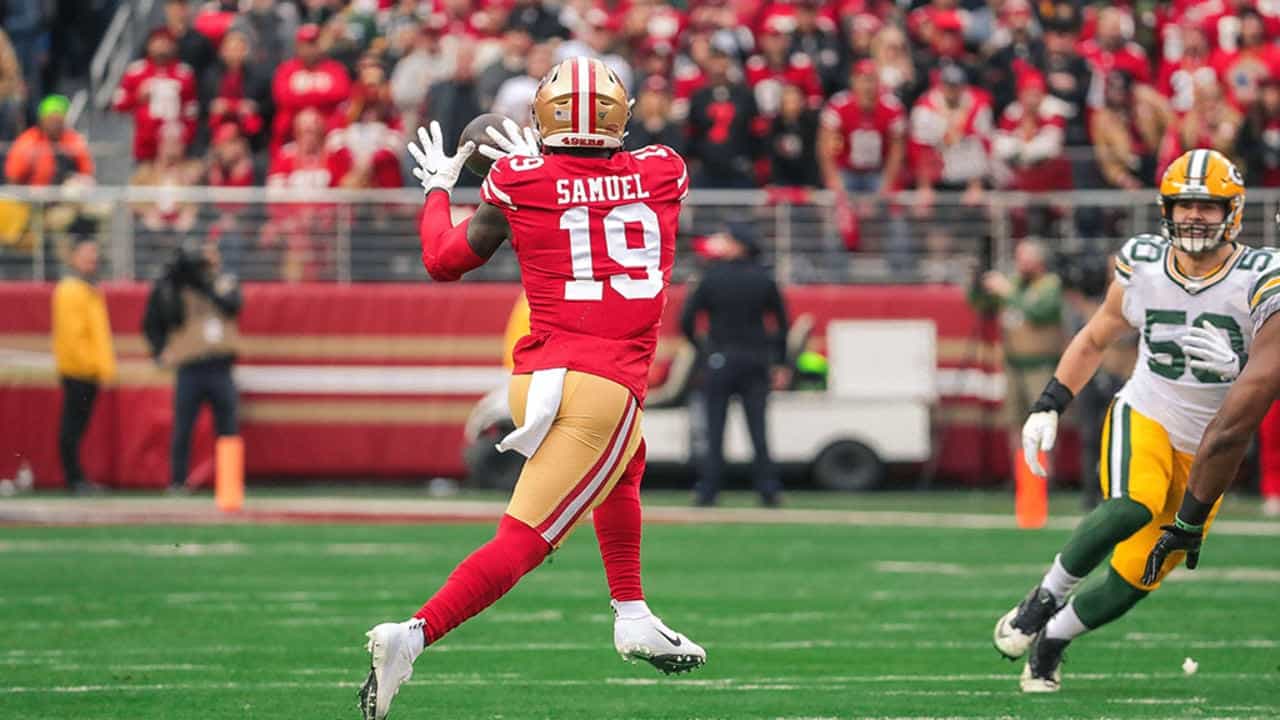 With the majority of fantasy football prospects either signed or waiting for the right opportunity, our third post-free agency stock report looks at how trades and 2020 NFL free agency have impacted dynasty wide receiver rankings.

The most significant wide receiver beneficiaries of the 2020 NFL Free Agency weren’t even on the open market. The biggest winners are wide receivers that saw their target share and status as number one WR increase after the departure of key veterans.

The trades of DeAndre Hopkins and Stefon Diggs opened the door for Will Fuller and Adam Thielen, respectively, to step in as number one wide receivers, while Emmanuel Sanders signing in New Orleans did the same for San Francisco 49ers’ wide receiver Deebo Samuel.

Our wide receiver stock report looks at the impact of those trades on 2020 wide receiver dynasty rankings, plus the effect it has on the incumbent wide receivers in Arizona and Buffalo. Also, don’t forget to check out our Quarterbacks and Running Backs stock reports heading into the 2020 NFL Draft.

With half-year rental Emmanuel Sanders leaving the Bay Area for “The Big Easy,” second-year wide receiver Deebo Samuel is a dynasty asset worth investing in for the future.

Samuel and 2019 All-Pro tight end George Kittle are the only San Francisco players with considerable dynasty value, so I suggest buying Samuel at his current ADP before it rises even higher. Samuel is currently #51 overall on FantasyPros, but I’d value the former South Carolina wide receiver at least a round higher in my 2020 dynasty wide receiver rankings.

The 49ers’ backfield is a weekly guessing game, while the other wide receivers on the roster (Kendrick Bourne, Trent Taylor, Marquise Goodwin, Dante Pettis, Jalen Hurd) are either replaceable or unproven. Even if the 49ers add an impact wide receiver in Rounds 1-2 of the 2020 NFL Draft, head coach Kyle Shanahan will find ways to get the versatile Samuel involved.

After fighting through an injury-marred 2019 season, Minnesota Vikings’ wide receiver Adam Thielen is an obvious bounce-back candidate in 2020. Thielen has a tremendous connection with quarterback Kirk Cousins, and Diggs’ trade to Buffalo opens up even more targets for the hometown Minnesota State product.

I get the hesitation, however. Thielen will be 30 years old at the start of the NFL regular season, which is a major no-no in dynasty. The wide receiver also battled hamstring/ankle injuries in 2019 en route to his worst statistical season in years. Thielen did manage six touchdown receptions in his ten games, but his targets, receptions, yards, and catch percentage all dropped dramatically from years past.

With that said, there will be ample opportunity for Thielen to create fantasy gold in a Diggs-less offense. Thielen’s game built on exceptional route-running, toe-tap sideline catches, and a wider-than-expected catch radius is one that should age beautifully if the wide receiver can maintain his health.

The Houston Texans illogical trade of perennial All-Pro DeAndre Hopkins opened the door for Will Fuller to stake his claim as Houston’s number one wide receiver.

The speedy Fuller has flashed big-play potential when healthy, but those days have been few and far between during his pro career. Fuller has battled multiple soft-tissue injuries along with a torn-ACL, broken collarbone, and rib fracture. Those injuries have led to Fuller only playing 42 out of a possible 64 games in his four NFL seasons.

The risk is enormous when selecting Fuller, but the reward could be astronomical. Fuller has averaged 14.3 yards per catch, making him the ultimate boom-or-bust prospect. The Texans’ recent acquisition of fellow often-injured wide receiver Brandin Cooks threw a bit of a wrench in Fuller’s potential target share. Still, Cooks is probably less of a concern than any receiver Houston could’ve drafted at #57 overall in a deep 2020 wide receiver class.

Let me go on the record and say that I still value Christian Kirk as a solid WR3 in dynasty fantasy football. While the Arizona Cardinals’ acquisition of Hopkins naturally impacts Kirk, it isn’t necessarily a stock-killer.

It is a ceiling-capper, though. Already on an offense that prefers to spread the ball around, Kirk now has to share his previously limited targets with arguably the top wide receiver in the game. Due to missing a handful of games, Kirk finished 2019 with the 31st most targets in the NFL. That number is sure to drop even more in 2020, bumping Kirk down to an inconsistent FLEX option.

The ageless Larry Fitzgerald actually led the Cardinals with 108 targets, which was the ninth-lowest for target leaders across the National Football League. Only the 49ers, Ravens, Vikings, Redskins, Steelers, Giants, Titans, and Colts targeted their number one pass-catcher less than the Cardinals a season ago. Five teams (Panthers, Rams, Browns, Buccaneers, Cowboys) had two players finish with more targets than the Cardinals’ number one targeted player.

In 2019, Buffalo Bills’ wide receiver John Brown had a career-year in basically every statistical offensive category. Brown’s 115 targets, 72 receptions, and 1,060 receiving yards were all career-highs, while the wide receiver’s six touchdown receptions fell one short of his career-best.

As good as Brown’s 2019 career-resurrection is, those numbers are going to be difficult to repeat after Buffalo traded a bushel of draft picks to Minnesota for wide receiver Stefon Diggs. With Diggs known for voicing his concerns about his lack of targets, the days of Brown getting 115 targets is likely a thing of the past.

In my last article, I wrote about the departure of Tom Brady on running back James White’s dynasty stock, and now we’ll look at the impact it has on wide receiver Julian Edelman.

New England’s quarterback situation is one of the NFL’s greatest unknowns heading into the 2020 NFL Draft. Do the Patriots draft their quarterback of the future, or are they really content with some combination of Jarrett Stidham and Brian Hoyer in 2020?

While we don’t have a full grasp of New England’s plan, we can look at current player values, and it isn’t pretty for Edelman. If you haven’t already sold Edelman, you’re unlikely to get any semblance of value, barring fantasy incompetence. As a 33-year old wide receiver with an unknown quarterback situation, Edelman is the very definition of depreciating value.