NCAA football starts this Saturday, which officially marks the start of NFL draft season for the league. The 2020 NFL draft class has a chance to be one of the best we have seen in many years. Elite prospects such as Tua Tagovailoa, Justin Herbert, Chase Young, Grant Delpit and Jerry Jeudy headline the deeply talented class.

Similar to almost every year, the 2020 NFL draft is expected to have many twists and turns. Below, I will take a crack at predicting how the entire NFL draft will play out by “mocking” all seven rounds. This includes projecting NFL compensatory picks, which will be awarded at the conclusion of the 2019 season.

Who will your favorite team select in the coming 2020 NFL draft?

Dolphins’ fans won’t be happy with me, however, Josh Rosen will struggle to succeed playing with the league’s worst offensive line. The search for the next great Miami Dolphins quarterback is over, as Tua Tagovailoa is the transcendent quarterback prospect that Miami has been searching for since the great Dan Marino retired.

Albeit the fact that they need offensive line help, the Cardinals take a potential game-changing pass-rusher. Young has prototypical size and traits that make him an instant impact player for the Arizona defense.

If the dysfunctional Raiders are selecting this high, it is safe to assume that Derek Carr’s days are numbered. Justin Herbert, the rocket-arm passer from Oregon, will be the face of the franchise as the team transitions from Oakland to Las Vegas.

It would be nice if you could clone Odell Beckham Jr. Well, maybe you can. Jerry Jeudy is an explosive receiver that can fill the void left when the Giants traded Beckham Jr. to the Cleveland Browns.

The time to end the Andy Dalton experiment has come. Jordan Love isn’t a household name yet; however, he has traits that are reminiscent of the reigning National Football League Most Valuable Player, Patrick Mahomes.

Trent Williams and the Washington Redskins are heading for a divorce, which makes left tackle the teams’ biggest need.

The Buccaneers could go in many directions with this pick, as they are a team with many needs. Consequently, the best player on the board is a ferocious pass-rusher that will immediately bolster the Buccaneers defense.

The Lions need an enforcer in the secondary, therefore, they take a player that appears to be the next Derwin James. Grant Delpit is a jack-of-all-trades type of player, hence he will elevate the Lions defense instantly.

Granted that this wouldn’t be the most appealing picks to Bills fan, it is necessary for Buffalo to build a competent offensive line in front of Josh Allen.

The Broncos defense is ascending and on the verge of being one of the league’s best. Adding a monster like Derrick Brown that offers the dominant line of scrimmage play will only accelerate that upward trend.

The Jets added a great deal of talent in the offseason such as Le’Veon Bell, C.J. Mosley, Kelechi Osemele and Quinnen Williams to name a few, however they failed to address the cornerback position. Jeffrey Okudah can be a shutdown cornerback at the next level, therefore, he would be a welcomed addition to the Jets defense.

The Jaguars haven’t had a big-time receiver in a long time, with this in mind, it makes a great deal of sense why Jacksonville would want to make this pick. Shenault is an elite prospect, with strong pass-catching ability and the ability to create after the catch. He could bring playmaking ability to the offensive side of the ball that the Jaguars haven’t seen since Maurice Jones-Drew retired.

The 49ers add the best linebacker in the 2020 NFL draft, which also provides a massive upgrade to the position.

Despite signing Cameron Wake in the offseason to bolster their pass-rush, the Titans still need help at the position. Gross-Matos has displayed game-changing ability that will have the Titans’ front office salivating. The selection of Gross-Matos is a pick that offers as much upside as any pick in the 2020 NFL draft.

Henderson is a brilliant football player that utilizes great skill and technique to mirror and erase an opposing offense’s top weapons. Cornerback is a major need for Houston, making this a match made in Heaven.

Seattle is a team that is in the process of revamping its once-feared defense. Julian Okwara has great instincts and uses his leverage very well, making him a challenge for opposing offensive tackles. Ultimately, Okwara has the potential to be more productive in the NFL than he has been at Notre Dame.

The Baltimore Ravens find themselves in an awkward position of needing pass-rush help. It’s awkward because the Ravens have been a team known for having a ferocious pass-rush since their inception into the league in 1996. Chaisson has all the tools in the world, if he can stay healthy, the Ravens found their next pass-rushing stud.

When you play in a division that includes Michael Thomas and the Saints high-powered passing attack, you better find corners that can cover.

The Cowboys are on the verge of investing big bucks into extending Dak Prescott and Ezekiel Elliot. Due to this, Amari Cooper could find himself the odd man out in Dallas. Tee Higgins is a touchdown machine that could provide Prescott with a big-time target in the red zone.

The Vikings haven’t been able to solidify the left tackle position in quite some time. With the cash they are investing in Kirk Cousins, it would be wise to keep him upright.

The Steelers have become the wide receiver factory in the NFL. In what is likely the final years of Big Ben’s NFL tenure, the Steelers are wise to add the electrifying receiver from Alabama.

Aaron Rodgers is one of the best players in the NFL; however, he cannot do it alone. Outside of Devante Adams, Rodgers doesn’t have much to work within Green Bay.

The Browns sniffed around Gerald McCoy and Mike Daniels in the offseason, yet, they were not able to land either. Raekwon Davis is a massive defensive tackle that makes a dangerous Cleveland defensive line even better.

The Raiders added a group of aging veterans to fill out their linebacker core, but it is clear that a youth movement is needed at the position.

Melvin Gordon is being difficult with the Chargers, so their best move is to draft a better, less expensive player. Travis Etienne is the real deal that could blossom into one of the league’s best running backs.

If the Eagles can sure up their secondary, they have the talent and depth to compete for another Super Bowl. Adebo is one of the most underrated prospects in the 2020 NFL draft and it would not surprise me in the least to hear his name called much sooner than here.

The Colts brought in Justin Houston on a one year deal. With that said, there is no guarantee he will back after this season. Curtis Weaver is an explosive sack-machine that was born to rush the passer.

Drew Brees cannot play forever and it is time for the Saints to start grooming his heir apparent. The 2020 NFL draft quarterback class is deep, which allows a player the caliber of Fromm to fall into New Orleans lap.

The Chiefs already have the best offensive in the NFL; however, adding an elite running-back talent like D’Andre Swift will make them merely unstoppable.

Like Travis Etienne, Georgia’s D’Andre Swift is another player that Pro Football network’s Tony Pauline grades as a first-round prospect for the 2020 NFL draft Georgia Bulldogs: Tony Pauline gives first round grades to Swift and…

Simmons might just be the best athlete in the draft. He offers game-changing speed and playmaking ability. It would be wise for the Rams to add some impact players on the defensive side of the ball to surround Aaron Donald.

The Patriots need a tight end. It’s that simple. Parkinson is an athletic marvel that could immediately become one of the best tight ends in the NFL, as he has the honor of catching passes from the G.O.A.T. 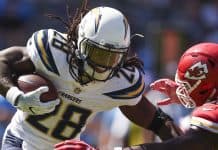 Melvin Gordon needs to bounce back in 2020 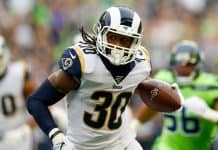 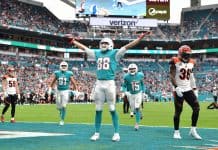 Mike Gesicki was mediocre in 2019, but there are reasons for optimism 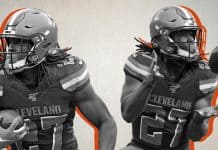