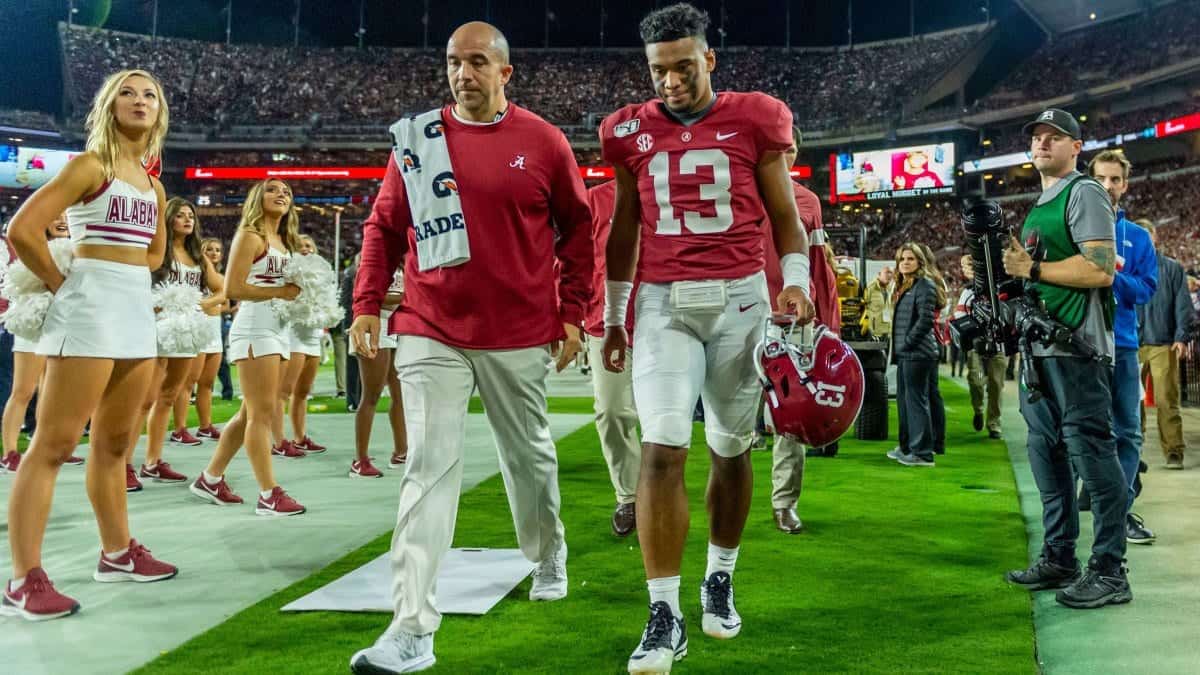 Every week, I open up the mailbag for anyone to send me their questions on the current college football season or the 2020 NFL Draft. This week, the mailbag includes questions on the Wisconsin Badgers, Alabama Crimson Tide quarterback Tua Tagovailoa, former Florida Gators and Ohio State Buckeyes head coach Urban Meyer, and Notre Dame’s playoff chances. We also talk about Washington State’s disappointing season and more.

Hey Tony, Urban Meyer recently talked about his interest in possibly joining the Cowboys. Is he more likely to join a USC type program or actually jump to a team in the NFL?

I’d be surprised if Meyer makes a move to the NFL. He’s had to retire and unretire multiple times due to health issues and it would only be worse in the NFL. I could see Jerry Jones making a big push for Meyer, but I don’t think it would be a good situation for him.

I could also see Tennessee making a push for Meyer. And let’s see what happens at Notre Dame, too. Speaking of which…

Is Notre Dame truly deserving of a playoff spot? After all, with a win over Michigan, the Wolverines will have three losses.

In my opinion, no. The loss to Georgia hurt and Georgia’s loss to South Carolina is a double whammy for Notre Dame. With six undefeated teams ahead of the Fighting Irish, too much must happen that is out of Notre Dame’s control.

Does Tua Tagovailoa’s injury really impact his draft stock? Is one missed game against Arkansas really a big deal?

No, not at all – it is not a nagging type of injury that is constantly sidelining him.

Now, if there are similar issues moving forward starting with or after the game against LSU, the injury/injuries will be a topic of conversation for teams come NFL Draft time. But missing a game against a terrible Arkansas team won’t move the needle against Tua.

Which game is the game of the season thus far: Auburn vs. LSU? Or Wisconsin vs. Ohio State?

I’m going with Auburn/LSU. I like Wisconsin, but I thought all along they have been playing over their heads – which the Badgers’ coaching staff deserves credit for.

Auburn’s only loss came at the hands of a good Florida team, and the game was close until the end. They also have a quality win over a good opponent in Oregon.

Wisconsin’s best wins were against a Michigan Wolverines team that was struggling at the time and a Michigan State team that has underachieved, in my opinion.

Washington State hasn’t lived up to my expectations this season, Tony. Being last in their division is very frustrating. What can they do to have a better second half of the season?

Get better and more consistent on defense – which more times than not is their downfall. They have always been an offensive-oriented program, especially under Mike Leach. The defense usually needs to just hold on, which they really haven’t done, starting with the loss to UCLA.

The victory over Colorado was not only important, but it was also impressive. They’ve got a tough game against Oregon this weekend, followed by three games they should win.

The Apple Cup could make or break their season.