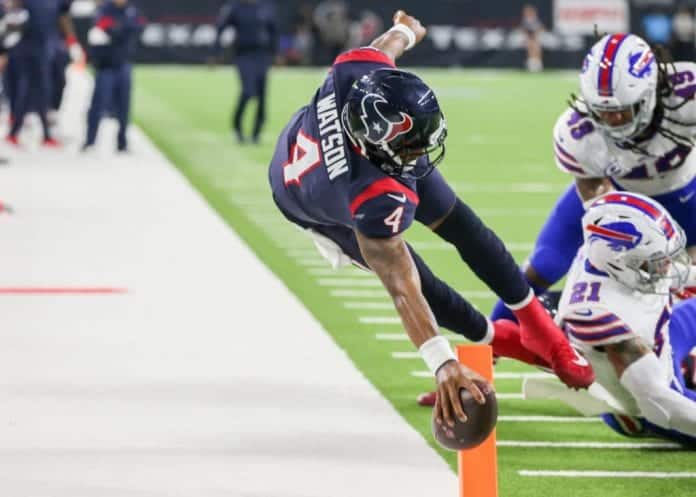 In this updated Houston Texans 7-round mock draft, we attempt to make up for the loss of DeAndre Hopkins despite limited draft capital following last year's trade to acquire Laremy Tunsil.

All in all, the Houston Texans had a very successful 2019 season, winning the AFC South division with a 10-6 record. They even notched the fourth playoff win in team history with a 22-19 overtime victory against the Buffalo Bills. Even better than any of these accomplishments, QB Deshaun Watson showed major growth and flashed signs of being an upper-echelon quarterback in the NFL. While Watson is on his rookie contract, the time for the Texans to make a run at a championship is now. In this Houston Texans 7-round mock draft, we will analyze who the Texans should select in the 2020 NFL Draft, which could help them on their quest for a Lombardi Trophy.

Unfortunately, the Texans won’t have a great deal of draft picks to work with, as they sent a bulk of their draft capital over the next couple of years to the Miami Dolphins to acquire offensive tackle Laremy Tunsil. Houston was desperate to find a left tackle who could protect Watson’s blindside, and it came at a big cost. Ultimately, the Texans sent their first-round pick in the 2020 NFL Draft and their first and second-round picks in the 2021 NFL Draft to acquire Tunsil.

Tunsil is a great player, but even after his acquisition, the Texans offensive line struggled in 2019. We could talk all day whether or not this was a good use of resources, but the fact remains that the Houston Texans will only have six picks to work with in the 2020 Draft unless they make some type of unforeseen trade.

There is no doubt that the biggest hole on the Houston Texans’ roster is at the cornerback position. Both Bradley Roby and Johnathan Joseph are scheduled to be unrestricted free agents, and the organization decided to release Vernon Hargreaves on February 14th. As it stands today, the team’s starting cornerbacks would be Gareon Conley and Lonnie Johnson. Conley and Johnson are long boundary cornerbacks, so finding someone that could fill a void in the slot would be a good start.

Lamar Miller suffered an ACL injury, which cost him the 2019 season. He is now scheduled to be an unrestricted free agent. Carlos Hyde filled in nicely for Miller, rushing for a career-high 1,070 yards, but he too is scheduled to be an unrestricted free agent. The Texans will have roughly $60 million in salary-cap space to work with, so bringing back Miller or Hyde wouldn’t be too challenging. However, it would be a fair assumption to think that Houston will be looking for an upgrade here. They already invested a third-round pick in the 2020 NFL Draft in the running back position, as they sent this pick to the Cleveland Browns for Duke Johnson.

Defensive tackle D.J. Reader is rumored to be a hot commodity once NFL free agency starts, and it is likely that he will price himself out of Houston. If this occurs, defensive tackle becomes a major need. Also, let’s not fool ourselves; J.J. Watt isn’t getting any younger, and injuries continue to catch up with him. It is time for an injection of youth into the Houston defensive line.

It ended in an ugly divorce, but I cannot fathom how the Texans let Pro Bowl pass rusher Jadeveon Clowney get away. Sure, he was going to warrant big money, but as the Texans learned, replacing him was not an easy task.

As a result of losing D.J. Reader to free agency, the Texans spend their first pick on a player that is a very suitable replacement. Justin Madubuike is a different player than Reader, as he is more of a three-technique defensive tackle, but he has the tools to succeed in any defensive front. He is quick off the snap and plays with tremendous leverage, which allows him to cause constant disruption and penetration. He plays with impressive power, and his hand usage is marvelous as well.

In a draft class featuring Auburn’s Derrick Brown and South Carolina’s Javon Kinlaw, Madubuike might present more upside than any other defensive linemen in the 2020 NFL Draft. In the clip below, watch #52 for the Texas A&M Aggies line up at the nose tackle position and easily discard the center:

Madubuike is physically impressive, and his natural power is unparalleled in this draft class. The Texans are lucky enough to have a first-round talent fall to them at the end of the second round. He is an instant plug-and-play type of player, who will greatly improve the Houston defensive front.

As I mentioned in a previous article, Amik Robertson might just be the best ballhawk in the 2020 NFL Draft. During his collegiate career, Robertson secured 14 interceptions and 48 passes defended. He is a true alpha at the position, as he believes in his ability and has no trouble letting you know that.

He has the skill-set to excel as a nickel corner in the NFL, as he is super twitchy, quick, and possesses elite ball skills. The ability to bait quarterbacks and show off those insane ball skills are evident in the clip below:

Amik Robertson to the 🏠!@LATechFB jumps out to the lead! pic.twitter.com/joNFlgA1Hr

He will find playing time instantly, as he possesses traits that no one else on the Houston roster currently presents. For a team not having a first-round pick, the Texans have done a great job at adding two quality starters to the defensive side of the ball.

Houston should find a way to upgrade the tight end position. Jordan Atkins is the team’s current starter, and he is coming off a season where he produced an unimpressive 418 receiving yards and 2 touchdowns.

Thaddeus Moss, son of NFL Hall of Famer Randy Moss, could give Watson a more dynamic receiving weapon. Moss showed his ability to shine on the big stage, hauling in two Joe Burrow touchdown passes against the Clemson Tigers in the National Championship game.

There are many layers of Moss’ game, which will translate nicely to the NFL. First, he is a tremendous blocker, as he is strong at the point of attack and athletic enough to reach blocks on the second level. Next, he has great hands and is a reliable pass catcher. He presents a great catch radius and uses his frame to shield defenders.

Watch #81 in the clip below, and you will see the added value he brings with his ability to block:

Love the effort from Thaddeus Moss (TE 81) on this block! pic.twitter.com/HEsh0by6tW

Moss might not be ready to be a number-one tight end as a rookie, but he certainly has the athleticism and tools to blossom into a quality NFL starter.

Maryland running back Javon Leake isn’t a household name in this 2020 NFL Draft class. In fact, he isn’t even the biggest name running back from Maryland, as that honor belongs to Anthony McFarland, Jr. However, Leake will continue to see his draft stock ascend as we get deeper into the process.

Leake led the Maryland Terrapins in rushing in 2019 with 736 yards. He also showed a nose for the end zone, accounting for 8 rushing touchdowns. He runs with a tremendous blend of speed and patience. He might not have the makings of a bell-cow running back in the NFL, but he has the tools to become a quality role player. It is also worth mentioning that Leake is among the best kick returners in the 2020 NFL Draft, netting over 800 return yards and 2 touchdowns for the Terrapins last season.

There was a time when Syracuse pass rusher Alton Robinson was widely considered a day two pick in the 2020 NFL Draft. He had a fairly poor campaign in 2019, which has his draft stock on a bit of a decent, but he still offers promise as a developmental prospect.

Robinson looks the part, possesses a lethal first step, and has tremendous length. He has an arsenal of tools in his pass-rushing portfolio. He doesn’t offer much against the run, so he may become more of a “pass-rush specialist” at the next level.

Charlie Heck is a big man, standing 6’8″ tall, and weighing in the ballpark of 310 pounds. At the next level, he will be nothing more than a depth player, but offensive line depth is something the Texans could really use.