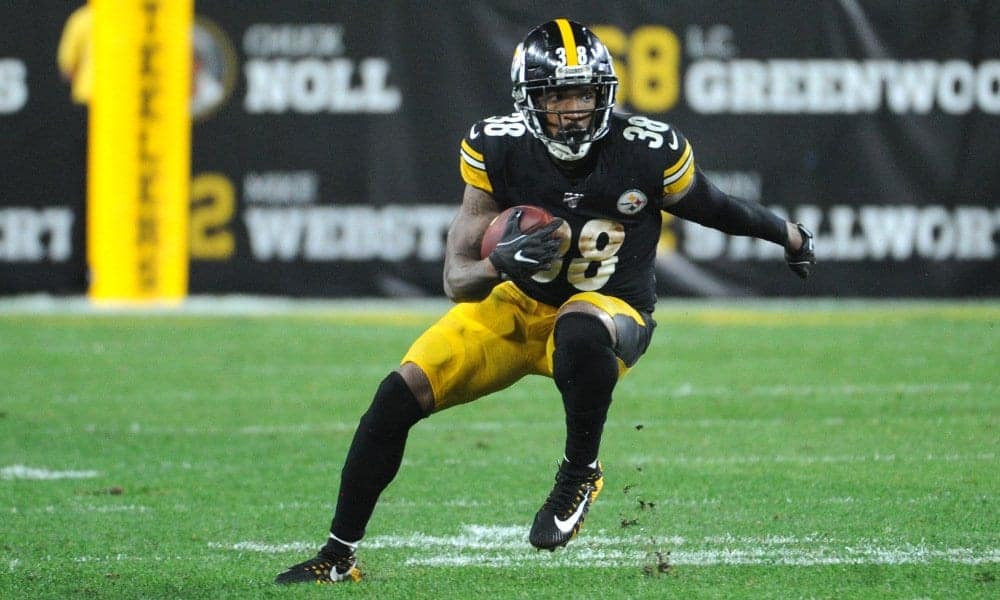 The 2019 NFL Week 9 DraftKings slate is riddled with several players who have seen an uptick in pricing, which has made it hard to find value, especially at RB. I’m almost always looking to pay down at quarterback and wide receiver to afford the high priced running backs in cash games. Here is who I believe are the top Week 9 DraftKings cash game value picks at RB.

The Steelers’ RB situation will define the Week 9 cash game slate on DraftKings. James Conner suffered a shoulder injury in the 4th quarter of their Monday Night Football game against the Miami Dolphins. Benny Snell is also banged up with a knee injury. Neither player has practiced all week, making Samuels the top value this week if both were to sit out in Week 9. Samuels is a threat to catch passes out of the backfield and has the size not to get eaten up in between the tackles. He would command all of the RB touches, at home behind a robust offensive line. Samuels is a lock for cash games and tournaments if Conner and Snell sit out this game.

CONNER HAS BEEN RULED OUT. LOCK-IN JAYLEN SAMUELS IN ALL FORMATS

Some may have a mental block when they see a five-figure salary next to a player. “That’s far too expensive! How could you?!” You didn’t say the same thing about Dalvin Cook when you saw his price tag ($9500), did you? At $10,000, McCaffrey is finally at a fair price.

The DraftKings cash game slate is somewhat stretched for value, but it will all open up if Conner and Snell are ruled out. At that point, it’s feasible to make a lineup with both McCaffrey and Cook. I’m willing to lean that way as well if we get the injury news I expect. I don’t need to tell you he’s a good play; he met value last week despite a tough San Francisco 49ers defense. Our RB rankings have him as the RB1 this week. You can’t go wrong if you play him every week.

If I had to choose just one this week, it’s always McCaffrey, but Cook is a close second. His team total isn’t out yet as sportsbooks are awaiting the Patrick Mahomes news. When it does open, it should be right around 25, giving him plenty of TD equity.

It’s possible to play both Cook and McCaffrey this week, as long as Samuels is playing. His snap share is down because they are removing him at the end of blowouts, giving Alexander Mattison some run with the offense. Cook is arguably the best RB in the league playing one of the first run defenses in the league.

If there is ever a week to play Bell, this would be it. He maintains a workload that can stand up to anyone and has a great matchup against the Miami Fish Tanks. His team total isn’t up to where you’d think it would be given the matchup, but that is because the New York Jets have looked abysmal up to this point. I probably won’t go there myself, but if you want a discount off of Cook and McCaffrey without sacrificing the touches, Bell is your guy.

Carson’s year-long numbers look promising. He has played 71% of the snaps and received an 11% target share. My biggest concern with him is Rashad Penny’s uptick in usage last week. Penny played 30% of the snaps against Atlanta, including several in the first half and red zone. That, along with a tough matchup, is enough to get me off of Carson in cash games. I would reserve him for tournaments.

I’m a little embarrassed for over-looking Nick Chubb in my first go around. His snap share is third on the slate behind McCaffrey and Bell. He handles essentially all of the RB carries and his 12% target share is respectable. The Browns rank 12th in adjusted line yards, 3rd in 2nd level rank (Football Outsiders) and 1st in explosive rushing via Sharp Football Stats. However, Denver’s defense ranks well in all of these regards as well. That said, they are going with a QB who does not have a lot of promise, to say the least.

There is a little bit of handicapper in picking Chubb this week. Cleveland should have more chances to create short fields with Small Hands Allen. Off the field, this team could be ready to quit. They’ve played their asses off the first half of the season, but have just two wins to show for it. With a chance that Denver just quits, Chubb has more positive game script equity in his range of outcomes.

The subjective angle aside, Chubb is receiving a healthy amount of volume and has the ability to make the most out of that volume. He is my favorite RB of the $7000 range this week.

Jones has been the RB1 in fantasy football since his Week 1 dud in Chicago. Chargers’ defensive tackles Cortez Broughton and Brandon Mebane have not practiced all week, setting this up as another “smash spot” for Jones. My concern is with Jamal Williams splitting work with Jones and the potential return of Davante Adams. Both of Jones’ ceiling games had come when both of those players missed the game for Green Bay. Adams’ return from injury could reduce Jones’ target share, and as long as Williams is healthy, he will see usage. Despite a great matchup, Jones is riskier for cash than you think.

Gordon has received a stable workload since returning to the team earlier in the season. The firing of Ken Whisenhunt leaves some speculation regarding the direction of the offense, which makes Gordon a slight risk in cash games. His price is friendly, however, on a slate that does not have a lot of value. If Samuels plays, we don’t have to worry about plugging Gordon into our cash lineups. If Samuels were to sit, Gordon could become a necessary evil. He has a good match up and a respectable team total, so you could do worse.

Walton was the first overall pick in our site-wide Week 9 waiver wire mock draft, so he does have some merit this week. However, that speaks more to the desperate situation at RB in season-long leagues that it does excitement for Walton. I don’t want to play him this week. That said, his price tag is intriguing, and he was the bell cow for Miami on Monday Night. If an RB is going to see volume, he is viable in fantasy. Hopefully, Samuels plays so we can avoid this dumpster fire. Otherwise, it may be Walton week in daily fantasy.

The next player I’m locking in is either Cook or McCaffrey. Both of which are valid plays you can’t go wrong choosing.

After that, it’s anyone’s guess. I imagine Aaron Jones will be a popular play I don’t hate. If Samuels isn’t in, we will see plenty of Mark Walton, while Melvin Gordon is also in play despite his recent struggles.

Pay attention to the news as that always shapes how you should build your lineups. Good luck this weekend! I hope you found this article actionable.