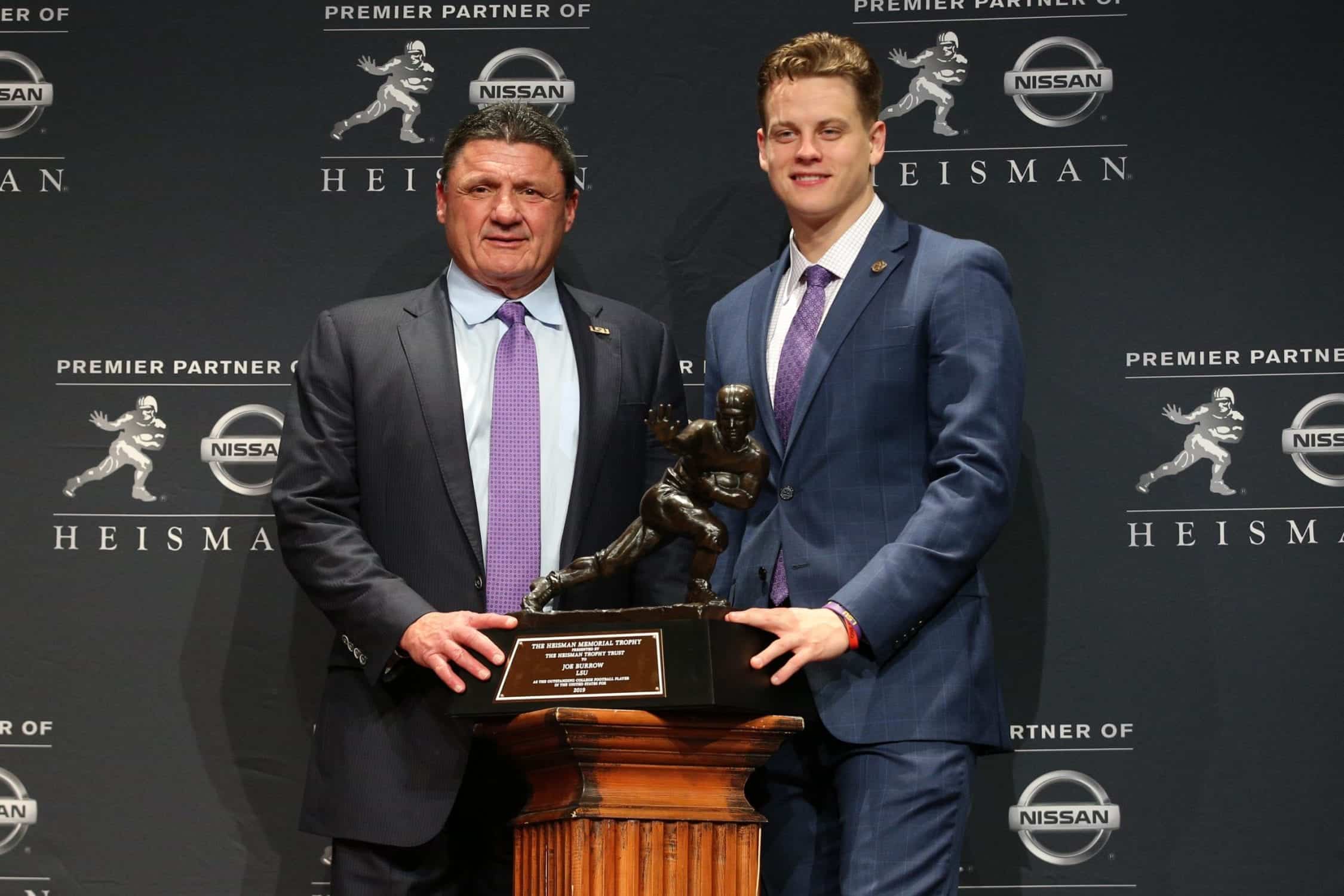 With one week left in the NFL regular season, the playoff picture has become very clear. What has also become clear is which teams will be picking at the top of the 2020 NFL Draft. With that said, let’s take a look at the Week 17 NFL Draft order scenarios and understand which teams could be drafting in the top five. The top of the draft is already set, four teams can draft as high as second, and one other team can jump into the top five. We’ll start with the easiest scenario.

The Bengals made their Week 16 game against the Miami Dolphins very interesting, rallying in the fourth quarter and forcing overtime. However, Miami went on to win in overtime, sending the Bengals to 1-14 and locking them into the first overall selection in the 2020 draft, where they will almost certainly select LSU QB Joe Burrow.

The Redskins enter Week 17 holding the second pick in the draft after their 41-35 overtime loss to the New York Giants in Week 16. They sit a half-game ahead of the 3-11-1 Detroit Lions. If Washington loses Sunday against the Dallas Cowboys, they will secure the second pick and have the opportunity to draft Ohio State defensive end Chase Young.

If they beat Dallas, they could potentially fall as far as the fifth pick if the Lions, Giants, and Dolphins were all to lose. In this scenario, they would most likely be no higher than fourth. The Lions would have a worse record, at 3-12-1, and New York is assured of winding up with an easier strength of schedule than Washington.

The determination for the fifth spot would rely on other results. The results of the following games would determine the positions: New Orleans at Carolina, San Francisco at Seattle, Indianapolis at Jacksonville, L.A. Chargers at Kansas City.

The Lions went from unbeaten in their first three games to potentially holding the third pick in the 2020 NFL Draft. They can end up as high as second if they lose to the Green Bay Packers and the Redskins defeat the Cowboys. Detroit would be 3-12-1, Washington would be 4-12. A loss for the Lions this week would guarantee a top-three pick in the draft.

The Giants are locked into a top-five pick. They likely blew their chances at holding the second pick when they beat the Redskins, but there is still a path back to that pick for the Giants as well. If they lose to the Eagles and both the Redskins and Lions win, then the Giants are back in contention for Chase Young with the second pick. It’s obviously a longshot with the Lions facing the Packers, who are playing for a first-round bye.

If one of the Redskins or Lions win, the Giants can move up to number three. If they both lose, the Giants will then remain fourth as long as they lose themselves. If the Giants beat the Eagles, the worse they can do is fifth and that would occur if the Dolphins lose to the Patriots. They are already assured of an easier strength of schedule, and thus the tiebreaker, over the Jaguars, who currently sit sixth in the draft.

So while Chase Young is likely out of the picture for the Giants, a top-five pick is not a bad consolation prize.

Unlike the Giants, the Dolphins are not yet assured of a top-five pick. But it would take a few upsets for them to fall out. They can actually make it to the second pick if results in Week 17 go their way.

That would require a loss to the Patriots by Miami, plus wins by the Redskins, Lions, and Giants. Miami would also need the Colts and Chargers to combine for a worse record than the Panthers and 49ers, similar to what we discussed above with the Redskins. If all that happens, Miami lands the second pick.

If the Dolphins pull off another Miami Miracle, they could potentially fall to sixth if the Jaguars lose. The position would then be dependent on the result of the Jets’ game against the Bills, as that is the only swing game in this scenario.

The Colts, Bengals, and Chargers were common opponents for the two, as were the Jets. Because of how tight the schedules are, the Jets actually play a factor in this scenario, because we’re already factoring in a Colts’ win since they would have beaten the Jaguars to trigger this scenario.

If the above scenario happens and Buffalo beats the Jets, the Jaguars would end up just ahead of the Dolphins in the 2020 NFL Draft order, having the easier strength of schedule with one less win. That would put the Dolphins at six.

If the Jets win, however, the two would be tied in their strength of schedule and it would then go to conference record. Miami is guaranteed to have a worse conference record than Jacksonville, as the Dolphins are currently 3-8 against the AFC while the Jaguars are 5-6.

We already detailed above how the Jaguars can sneak into the draft’s top five picks, sneaking in over the Dolphins. The Jaguars need to lose, have the Dolphins win and hope the Jets lose. That gets them a top-five pick. Otherwise, they are picking sixth.

If the Jaguars beat the Colts, the worst they can do is ninth. Even if all the other current 6-9 teams (NYJ, DEN, ATL, CLE) win, Jacksonville would own the strength of schedule tiebreaker over every one of them. So for them to pick ninth, it will have meant they defeated Indianapolis and all of the Chargers, Panthers, and Cardinals won. If the Jaguars do win, then depending on how many of those teams also win determines if the Jaguars pick sixth, seventh or eighth.