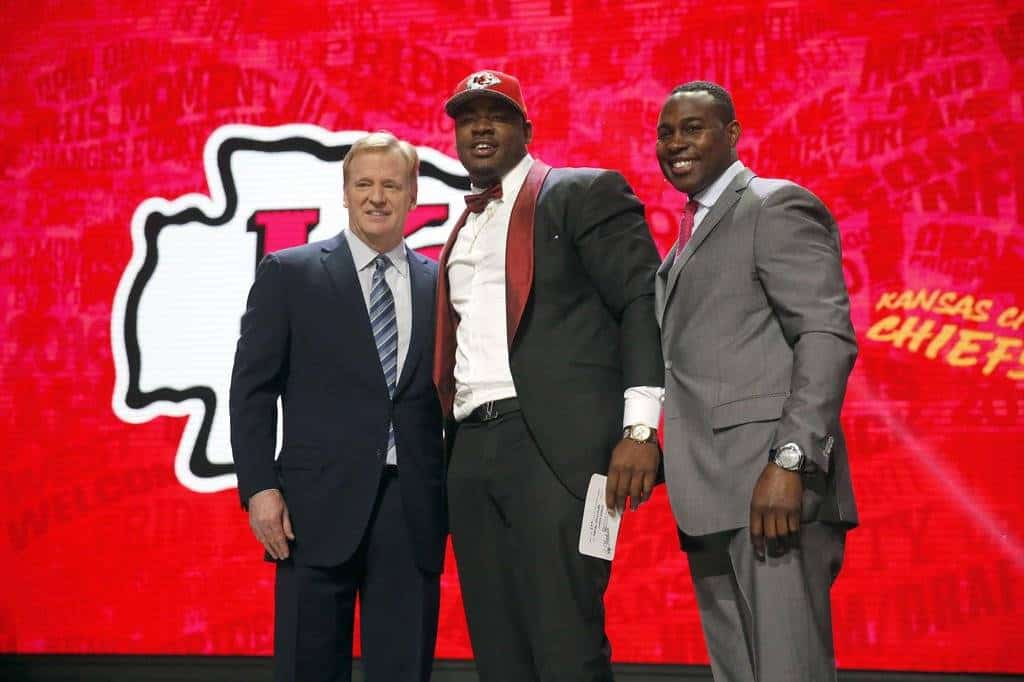 Photo Credit: USA Today
What's in this article? Click to show
Earlier this week, the Kansas City Chiefs and the Seattle Seahawks made a trade sending defensive end Frank Clark to Kansas City for a package that included the Chiefs’ first-round pick.
Picks of the past
2019 NFL Draft Day 2 Mock

Earlier this week, the Kansas City Chiefs and the Seattle Seahawks made a trade sending defensive end Frank Clark to Kansas City for a package that included the Chiefs’ first-round pick.

Let’s take a look at what those three picks might look like using the Fanspeak mock draft simulator.

First, though, here’s a trip down memory lane and go over past second and third round picks that have panned out for the Chiefs.

Picks of the past

Chris Jones was the 37th overall pick in the 2016 NFL Draft. The second-round pick has become an anchor to the Chiefs defense. Since he entered the league, he has improved every year, including a breakout season in 2018 with 15.5 sacks. Now paired with Frank Clark on the defensive line, it seems like his production will continue to increase.

In the third round of the 2013 NFL Draft, Kansas City selected tight end Travis Kelce. The 63rd overall pick has blossomed into arguably the best TE in the NFL. Kelce has surpassed the 1,000-yard mark in the last three seasons, going for 1,336 yards and 10 touchdowns in 2018. With MVP quarterback Patrick Mahomes under center for the Chiefs, it is safe to say you can make it four years in a row.

Now let’s examine the results of the mock draft. I did two different mocks and was able to get some great picks that I believe will make an impact.

I addressed four of the key positions of need for the Kansas City Chiefs – cornerback, linebacker, safety, and wide receiver. For a quick analysis of each player, I will quote what some of the guys from The Draft Network had to say about each player.

Cornerback was a position that needed to be addressed in each of the mocks. I believe it’s the position Kansas City should give attention to first. In both mocks, I went with CB Rock Ya-Sin. Here is PFN’s profile on Ya-Sin.

Kyle Crabbs of The Draft Network had this to say on Ya-Sin:

”Rock Ya-Sin has really exciting upside as a lock-down cover man corner in the NFL. Ya-Sin has adequate recovery burst and is pretty explosive when he’s collected over the top of routes, which allows him to aggressively drive to the football and combat the catch point.”

With the questions surrounding Kansas City wide receiver Tyreek Hill and Sammy Watkins‘ health always a question, receiver has become a position of need. For the WR position, I had two different picks.

Jon Ledyard had this to say about Butler:

”As a route runner, in the air and post-catch, Butler is a force to be reckoned with, capable of separating from defensive backs underneath, Mossing them at the catch point down the field or tossing them around after the catch. He projects best to an X-receiver role in the NFL, but he played in the slot a ton at Iowa State and an NFL team would be wise to deploy him in a similar fashion. Butler should be an early impact starter with All-Pro upside by year three.”

In one of the mocks, the only one I didn’t go cornerback first, I went WR and Deebo Samuel is the reason why.

Joe Marino explains a little of why I like Samuel:

”Samuel has been victimized by poor quarterback play at South Carolina but still showcased an exciting skill set. An outstanding route runner to all levels of the field, Samuel is a fit for any scheme with the upside to play outside and from the slot. His blend of ball skills and post-catch ability make him an intriguing weapon. By year three, Samuel has the upside be a prolific top-3 option for a productive NFL passing offense that makes plays in a variety of ways.”

With Tyrann Mathieu set as the free safety in Kansas City, Amani Hooker can fill the void at strong safety.

Kyle Crabbs explains how he fits that role:

”Amani Hooker projects favorably as a modern age Strong Safety. While Hooker lacks the initial burst and range to play in single high, he’s strong in Cover-2 and in shallow zones thanks to terrific football IQ, clean footwork for sudden transitions and good ball skills. Effective block shedding from the slot to blow up screens and impact the run. Hooker should be a starter who can be a true asset both vs. the run and pass. Should transition quickly thanks to football IQ.”

Linebacker is a position that can use an upgrade for the Chiefs. I believe Mack Wilson can turn into a solid starter for Kansas City.

For a little on Wilson here is a quote from Joe Marino:

”A 17-game starter in college, Wilson’s film has some ups and downs which should be expected. With that said, his peaks are really exciting in terms of what he can do in coverage, pursuit and playing into the line of scrimmage. He may not be an immediate starter but his skill set projects favorably to today’s NFL and what is needed from second level defenders. He has the ceiling of a high-quality starter with playmaking upside on every down.”

At the end of the day, mocks are just that. The real fun is watching the draft and comparing how many picks we got right.

For more mock drafts and analysis of players picked check out all the content at Pro Football Network.