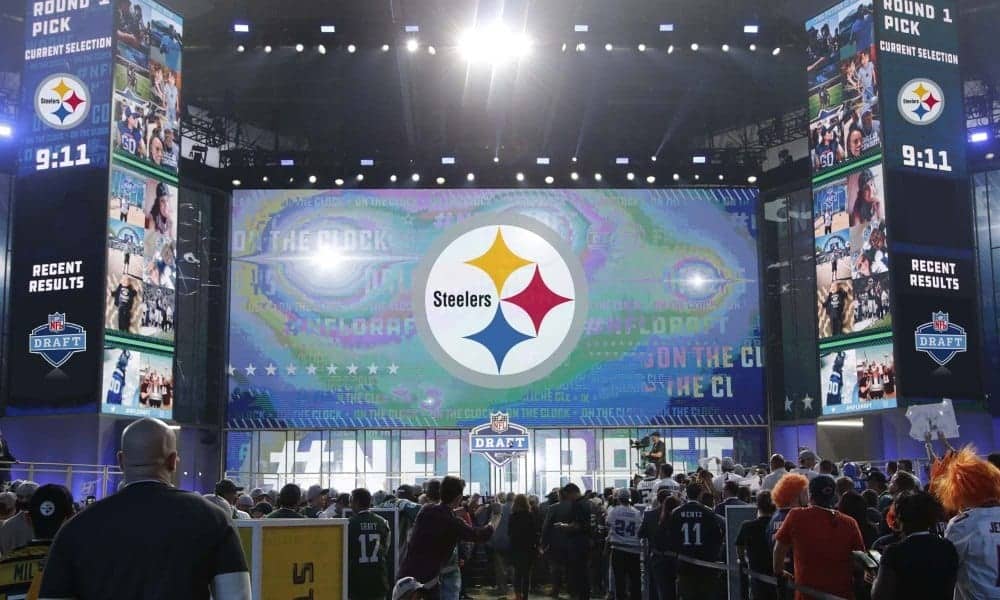 Photo Credit: USA Today
What's in this article? Click to show
The Pittsburgh Steelers look to reload in the NFL Draft and attempt to reclaim their spot on top of the AFC North.
Best Pick
Worst Pick
Biggest Steal
Biggest Reach
Draft Summary

The Pittsburgh Steelers look to reload in the NFL Draft and attempt to reclaim their spot on top of the AFC North.

Pittsburgh headed into the 2019 NFL Draft looking to find out what’s next after the end of the Killers Bees era?

As my AFC North and Goal co-host Travis Yates noted in his article NFL Draft: AFC North results suggest new era, the Pittsburgh Steelers stayed true to their winning formula and targeted players to replace those that they have lost and filled their most glaring needs.

The Steelers are looking to get back to the top of the AFC North as the Baltimore Ravens took the division crown last season. With the surging Cleveland Browns making dramatic moves this offseason, the AFC North division is up for grabs like never before. Did the Pittsburgh Steelers do enough in the 2019 NFL Draft to capture their ninth AFC North division championship? Let’s find out by reviewing the Pittsburgh Steelers’ selections in the 2019 NFL Draft.

Ryan Shazier will never be replaced.

But Devin Bush is our next “Shazier” 👊🏼 pic.twitter.com/FCfTzdiSBO

The Pittsburgh Steelers made zero effort to disguise who they wanted in the first round. Their interest in Devin Bush was fairly evident, and they got their man by trading up to the 10th spot, one spot ahead of division rival Cincinnati Bengals. The Bengals were enamored with Bush and were hoping that he would fall to them at the 12th position in the NFL Draft. The Steelers were in desperate need for a linebacker since the loss of Ryan Shazier to a spinal cord injury in 2017. The Steelers brass believes they have finally found his replacement in the former Wolverine.

Bush was the captain of an elite Michigan’s defense at just 20 years old. He was voted the 2018 Big Ten defensive player of the year by the Associated Press. Additionally, he posted some impressive numbers at the NFL Combine including a 4.43s 40-yard dash, a 40.5” vertical, and a 124” broad jump.

Devin Bush will fit in perfectly with the Steelers. He will create an immediate impact from Day 1 and will be the Steelers’ leader on defense for the next decade.

Zach Gentry is a former quarterback who didn’t progress much in the Michigan offense. Gentry’s stock started falling after he ran a 4.91 in the 40 at the NFL Combine, which was the No. 16 overall time out of 19 tight ends. At the Wolverines pro day in mid-March, he improved on that time, posting a 4.66 and a 4.70 but the harm might already be done.

He is enormous (at 6-foot-8), but Gentry also did poorly in his strength tests as well. His 12 bench reps at 225 lbs were the worst total of all tight ends. He tested very poorly, and his college production was not impressive. Some draft evaluators believed that he would not even be drafted. Zach Gentry definitely should not have skipped his senior season at Michigan.

The Steelers do have a need at tight end with Jesse James leaving for the Detroit Lions.  They only have oft-injured Vance McDonald and Xavier Gimble listed on their depth chart. However, they could have utilized this pick for another need such as outside linebacker or offensive line help especially since Gentry could have been available as an undrafted free agent.

Justin Layne converted from the wide receiver position as a freshman and developed into one of the Big 10’s best cornerbacks. He is not very experienced as a defensive back but has great size and plays physical. Layne has exceptional length at 6-feet-2 and possesses a longer wingspan than either rookie defensive linemen Nick Bosa and Ed Oliver. Layne does lack top end speed, but he compensates for that with his elite route recognition skills.

He graded as a second-round talent after a great showing at the NFL Combine. Layne joins a Steelers defensive backfield that includes veteran Joe Haden and newly acquired Steven Nelson. Look for the Pittsburgh Steelers to have Layne under the veteran corners and have the former Spartan take over for Joe Haden once his contract is up after the 2019 season.

The Steelers needed a wide receiver, and Pittsburgh knows how to draft wide receivers. However, I think the selection of Diontae Johnson was a reach. Johnson was projected as a day three pick by most NFL experts and evaluators. The Steelers are hoping Johnson can be some Antonio Brown clone because of the similar size, route-running ability, and playing in the MAC. While Johnson might become a valuable contributor, let’s slow down the hype train on any AB comparisons.

I see Johnson as more of a special teams contributor especially at the onset of his NFL career. He has a knack for home run plays. His speed and cutting ability are top-grade, and he was an excellent playmaker for the Toledo Rockets. His size-5-foot-10 and 183 pounds-and his hands will prohibit him from being much more than a Ted Ginn/Travis Benjamin clone.

To make matters worse, the Steelers had better options at wide receivers on the board. For example, Hakeem Butler, whose size would create mismatches like a tight end. How about the ultra-talented Jalen Hurd who could line up anywhere on the field? Maybe even Riley Ridley, who also fell to the third round. Ridley is a tough and physical and an excellent route runner. Pittsburgh tried to catch lightning in a bottle with this Johnson selection. I seriously doubt they did and is easily their most significant reach in this draft.

The Pittsburgh Steelers did very well in filling the majority of their needs. Moving up to secure inside linebacker Devin Bush was a bold move but a move that they had to make with the Cincinnati Bengals at pick #12 targeting Bush to help their thin linebackers corps. They got a steal with cornerback Justin Layne falling to them in the third round. I also believe linebacker Sutton Smith, who was drafted in the sixth round, could also make an impact as an edge rusher in the Steelers’ defensive schemes.

As I mentioned, I am not enamored with the selections of wide receiver Dontae Johnson and tight end Zach Gentry. I believed that there were much better options on the board to help the Steelers in their quest to reign supreme in the AFC North.

Ultimately, they attacked their three most glaring needs at inside linebacker, wide receiver, and cornerback in the 2019 NFL Draft. I think the Steelers hit on two of those needs and as Meat Loaf sang, “Two out of Three Ain’t Bad.”

In this article:Devin Bush, Featured, featured