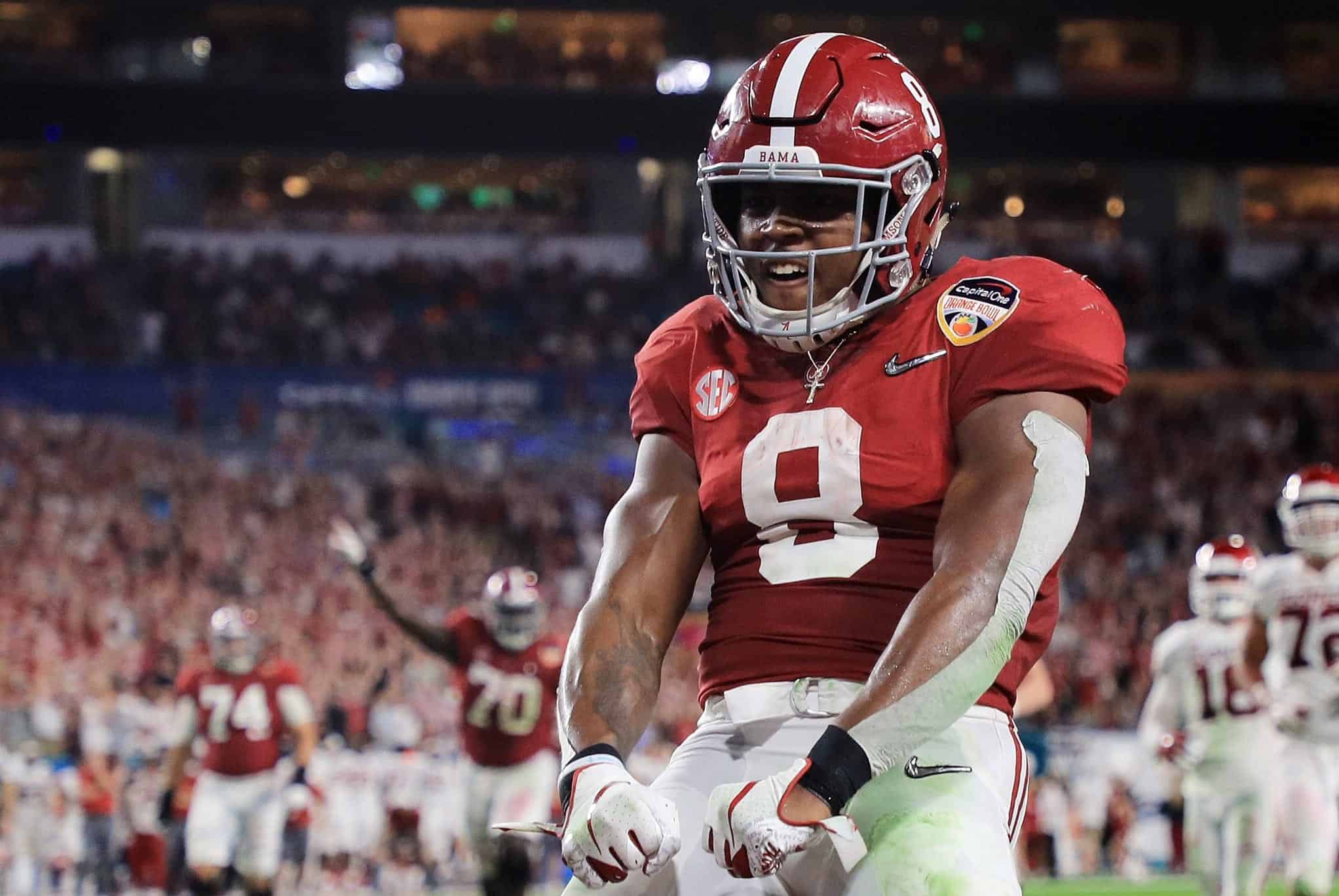 Photo Credit: Mike Ehrmann/Getty Images
What's in this article? Click to show
With the 24th pick in the first round of the 2019 NFL Draft, the Oakland Raiders selected running back Joshua Jacobs from Alabama.
Strengths
Weaknesses
How will Jacobs help the Raiders?

With the 24th pick in the first round of the 2019 NFL Draft, the Oakland Raiders selected running back Joshua Jacobs from Alabama.

It takes a special running back to be selected in the first round of the 2019 NFL Draft. Gone are the days of the workhorse running back. Now you need a back who can do it all. A player who will run hard and catch passes out of the backfield. He also has to be trusted in the passing game as a blocker. That running back is Joshua Jacobs from Alabama.

Joshua Jacobs’ biggest strength has to be his vision and patience behind the line of scrimmage. He’s reminiscent of Le’Veon Bell with his willingness to sit behind the line and let his blockers open up a lane for him. Once his line has done their job, he hits the hole with conviction. His quick feet and change of direction skills allow him to make defenders miss in the hole. He’s the type of running back who isn’t going to make many negative plays.

The other big thing in Jacobs’ favor is the system he comes from. He’s learned under the tutelage of Nick Saban, one of the most successful college coaches of all-time. Being with Alabama has allowed Jacobs to sit behind a stable of backs and wait his turn. This means he comes to the NFL with minimal tread on his tires. For a position that tends to have a short shelf-life, that’s a huge boon.

Despite having the quickness at the line of scrimmage to make defenders miss, one of the few things missing from Jacobs’ game is long speed. He can get to the second level with ease, but once he’s there he’s not likely to be busting many long runs. While he’s not a home run hitter, Jacobs is a very solid running back.

If Jacobs is going to be a three-down running back, he’s going to have to improve his pass blocking technique. Jacobs shows a strong willingness in pass protection, but that can sometimes be his downfall. He’s eager to make contact with a defender and make a highlight-reel block. Jacobs will need to reign in this instinct at the next level. He’ll need to learn how to engage with blockers consistently and provide 2-to-3 second blocks.

How will Jacobs help the Raiders?

More than his running ability, he’s also going to give them a legitimate pass-catching threat out of the backfield. In today’s NFL, that versatility cannot be overlooked.