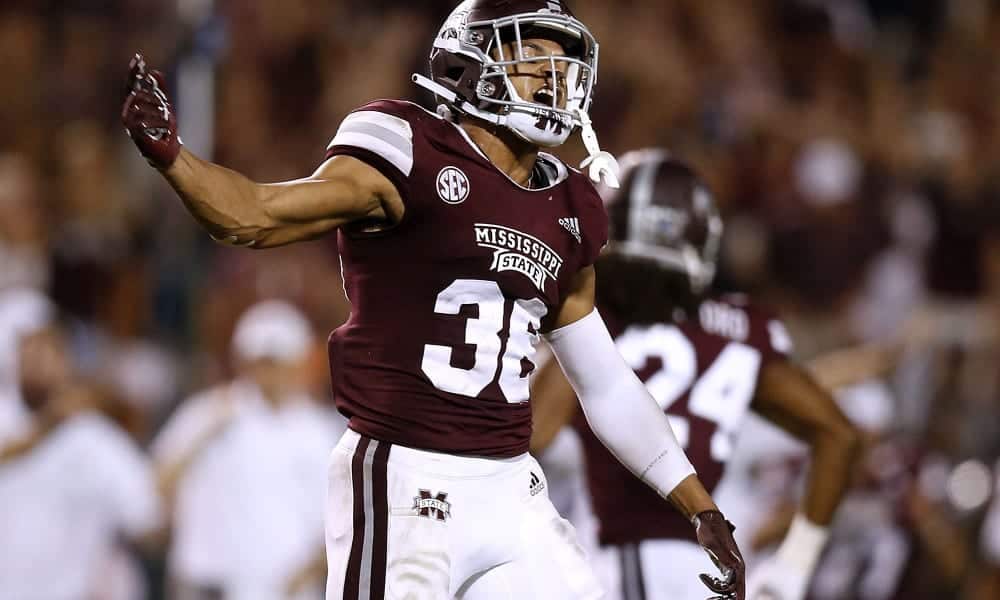 Photo Credit: Jonathan Bachman/Getty Images
What's in this article? Click to show
With the 27th pick in the first round of the 2019 NFL Draft, the Oakland Raiders selected safety Johnathan Abram from Mississippi State.
Strengths
Weaknesses
How will Abram help the Raiders?

With the 27th pick in the first round of the 2019 NFL Draft, the Oakland Raiders selected safety Johnathan Abram from Mississippi State.

Abram was an average prospect coming out of high school. Being a 2-star athlete doesn’t usually correlate with being drafted in the first round. With that said, Georgia saw his potential and offered him a scholarship. After a solid freshman season where Abram saw plenty of playing time, things would dissolve. Abram would miss the final game of his freshman season due to “personal issues”. He’d transfer back to his home state before his sophomore year.

After a year of junior college, Abram would get another shot playing for a Division one program. In his senior season, Abram would lead Mississippi State in tackles and be voted first-team All-SEC. In a class low on big hitter playmaking safeties, Abram may be the best of the bunch.

This guy is a baller. He has an elite ability to find the football. furthermore, Abram is the epitome of alley tackling. He’s the kind of safety that just flies into your television screen to destroy a running back who looks to have found some space to the outside. Does a splendid job of keying the quarterback’s eyes as well as the receiver tipping a deep pass coming into his hands. This kid wants to hit you in the mouth. Center field coverage is up there with any safety in the class. Does a serviceable job as the last line of defense even with that not being his strong suit. Plays like an additional linebacker against the run. If he’s on your team, expect him to get it hands on the ball almost every game.

Abram is so aggressive he’s borderline violent. He will get his share of yellow flags at the next level unless he learns early. When attempting big hits he’ll occasionally miss entirely. Coverage is not where he’s most effective. Playing with emotion is a good thing, but Abram tends to overdo it. He has something to say on nearly every defensive play. He’ll need to harness that emotion and develop some self-control. Many scouts or coaches will love his tenacity. It is infectious and the defense can feed off of that. With that said, Abram will need a short leash early for fear of spiraling out of control.

How will Abram help the Raiders?

Abram’s ceiling outweighs the concerns people have. Abram has a chance to fit the mold of Jamal Adams in New York. If he can keep his nose clean, he should be an enforcer right away. He flashes elite safety play at times and is best used as an in-the-box safety. He’ll help in run support and can cover tight ends and running backs on passing downs. As a strong safety at the next level, he’ll fight for a starting job in training camp.