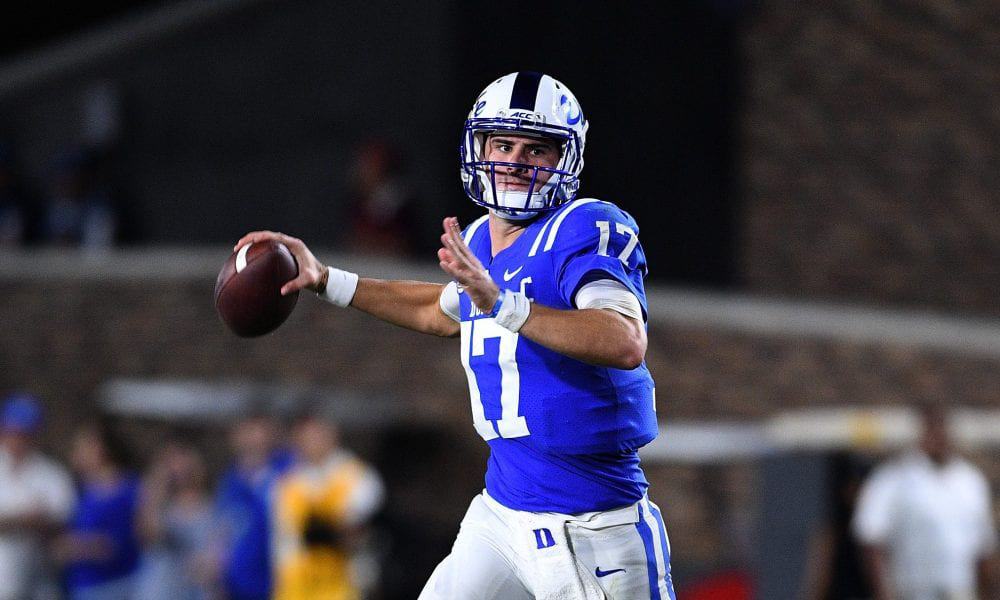 Photo Credit: USA Today
What's in this article? Click to show
With the sixth pick in the first round of the 2019 NFL Draft, the New York Giants selected quarterback Daniel Jones from Duke University.
Strengths
Weaknesses
How will Jones help the Giants?

With the sixth pick in the first round of the 2019 NFL Draft, the New York Giants selected quarterback Daniel Jones from Duke University.

Daniel Jones has been the most controversial quarterback of the 2019 NFL Draft class, receiving lower grades by media personalities, but apparently is much loved in NFL circles. At 6’5” and a solid 230 lbs, Jones measures out similarly to the larger, athletic quarterbacks that have reached the NFL in recent memory. With three years of starting the experience at Duke, under noted quarterback guru David Cutcliffe, Jones has the pedigree that appeals. Seemingly an easy player to coach up and a tough, physical quarterback who ran for over 1300 yards in his career, he plays fearlessly and displays intelligence from game to game.

Jones is one of the more cerebral players of this year’s quarterback draft class. Having the experience under a noted coach that has worked with Peyton and Eli Manning is demonstrable through his play. Jones sees the field well and makes excellent pre-snap reads or adjustments to counter defensive schemes. He’s a smart player that will take what defenses will give him as he moves through his progressions.

More than anything, Jones has good accuracy in the short and intermediate areas of the field. He’s able to deliver quick passes with power, and fit them into windows away from the defender and where his receiver can get it. With a clean pocket, few are as accurate as Jones. Also, he has the size, movement skills and toughness to deliver on the ground when needed. The North Carolina Tar Heels found this out the hard way after he gashed them for 186 rushing yards off of several read-option plays.

Jones lacks the overall arm strength that could take him to the next level as a prospect. His ceiling is minimal because of this. Too many times, he makes throws that lose the necessary velocity to maintain a tight arc through the air and reach its target. His throws often hang a bit, and this makes it easy for defenders to play the ball more than the receiver. This mainly occurs when he’s under pressure. Despite being tough, Jones is easily affected by pressure and lacks the arm strength or flexibility in his release points to change his delivery. This limits even his mobility in around the pocket or to extend plays.

Overall, he’s also not very consistent. Half of his production came within three games, signifying that he’s not exactly a player that can put a team on his back. With the right supporting cast, he’ll reach his ceiling as an average starter.

How will Jones help the Giants?

Jones has the potential to be an immediate starter if the structure is placed for him on the offense. Considering his size and athleticism, Jones will provide a chance for the offense to be creative, employing some read-option and focusing on short to intermediate throws to create a rhythm game that he can adjust to quickly. This will also allow his intelligence to help him win early, letting him conduct audibles when necessary. Jones will be a high-quality backup that could compete for starting time. If not, his cerebral tendencies will be a significant contributor in a quarterback room.

In this article:Daniel Jones, Featured, featured