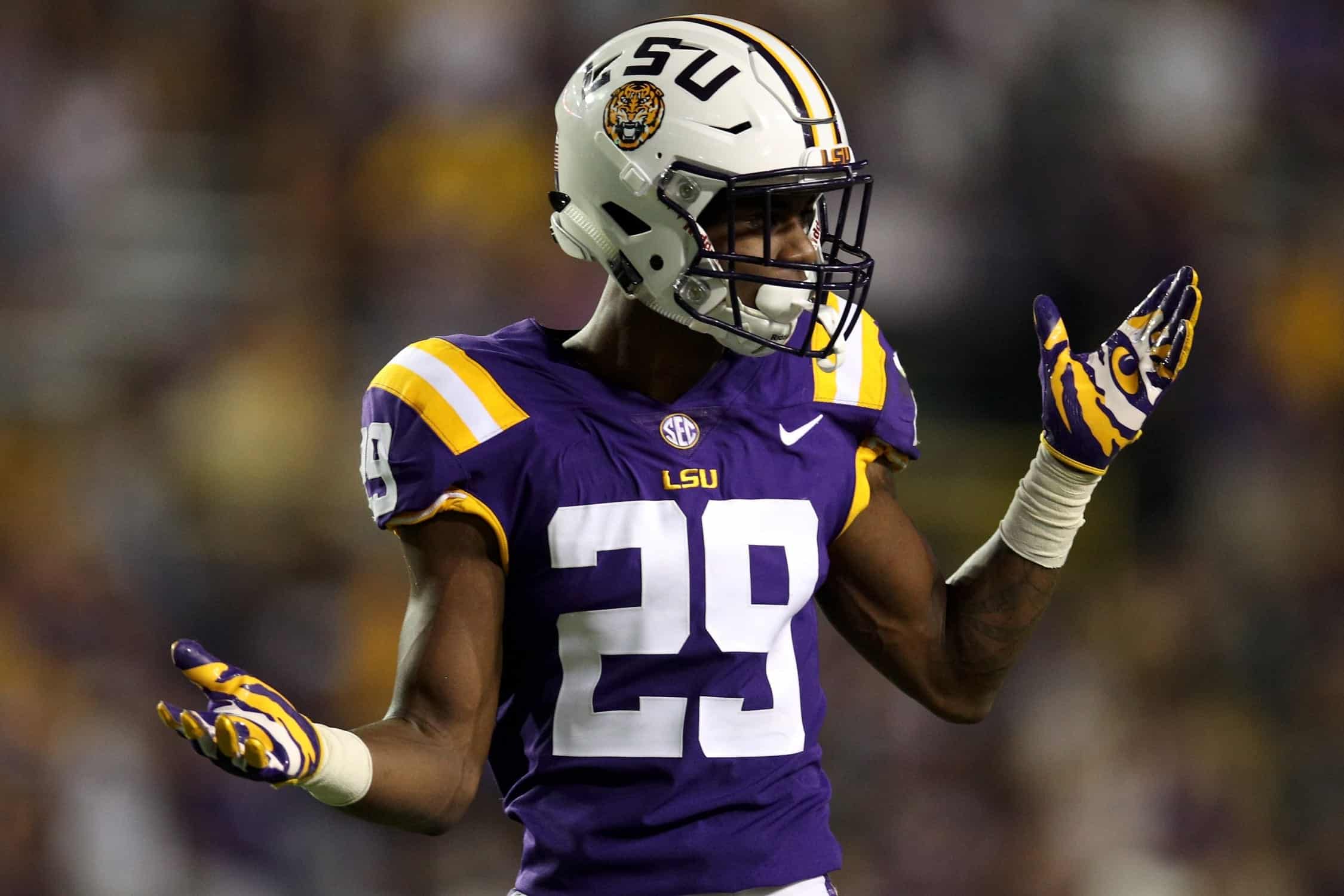 BATON ROUGE, LA - SEPTEMBER 30: Andraez Williams #29 of the LSU Tigers reacts during the game against the Troy Trojans at Tiger Stadium on September 30, 2017 in Baton Rouge, Louisiana. (Photo by Chris Graythen/Getty Images)
What's in this article? Click to show
Different views surround Andraez “Greedy” Williams’ in terms of his cornerback ranking in the 2019 NFL Draft. No matter where he ends up, Williams has the skills to take his play to the next level.
Man Coverage
Zone Coverage
Tackling
Run Support
Final Verdict

Different views surround Andraez “Greedy” Williams’ in terms of his cornerback ranking in the 2019 NFL Draft. No matter where he ends up, Williams has the skills to take his play to the next level.

Andraez Williams is projected to be a first-round pick during the 2019 NFL Draft. Right now, he could come off the board as a top-10 pick or as late as the early 30s. His draft destiny will depend in part due to how he performs at the 2019 NFL Combine. Williams has proven that he is ready to start on an NFL team, but he still needs to work on a few aspects of his game.

Williams will be fighting with the top zone coverage cornerback, Georgia’s DeAndre Baker and the most physical corner, Washington’s Byron Murphy. However, Williams has some qualities that can have him exceed these two competitors. He also has some weaknesses that some receivers and quarterbacks will capitalize on early.

The categories covering Williams’ game that are discussed below are man to man defense, zone defense, tackling, and run help. First, we will look at his best quality.

Williams is possibly the best man coverage cornerback in this draft due to his flexibility and low swiveling hips as well as being a very patient corner too. 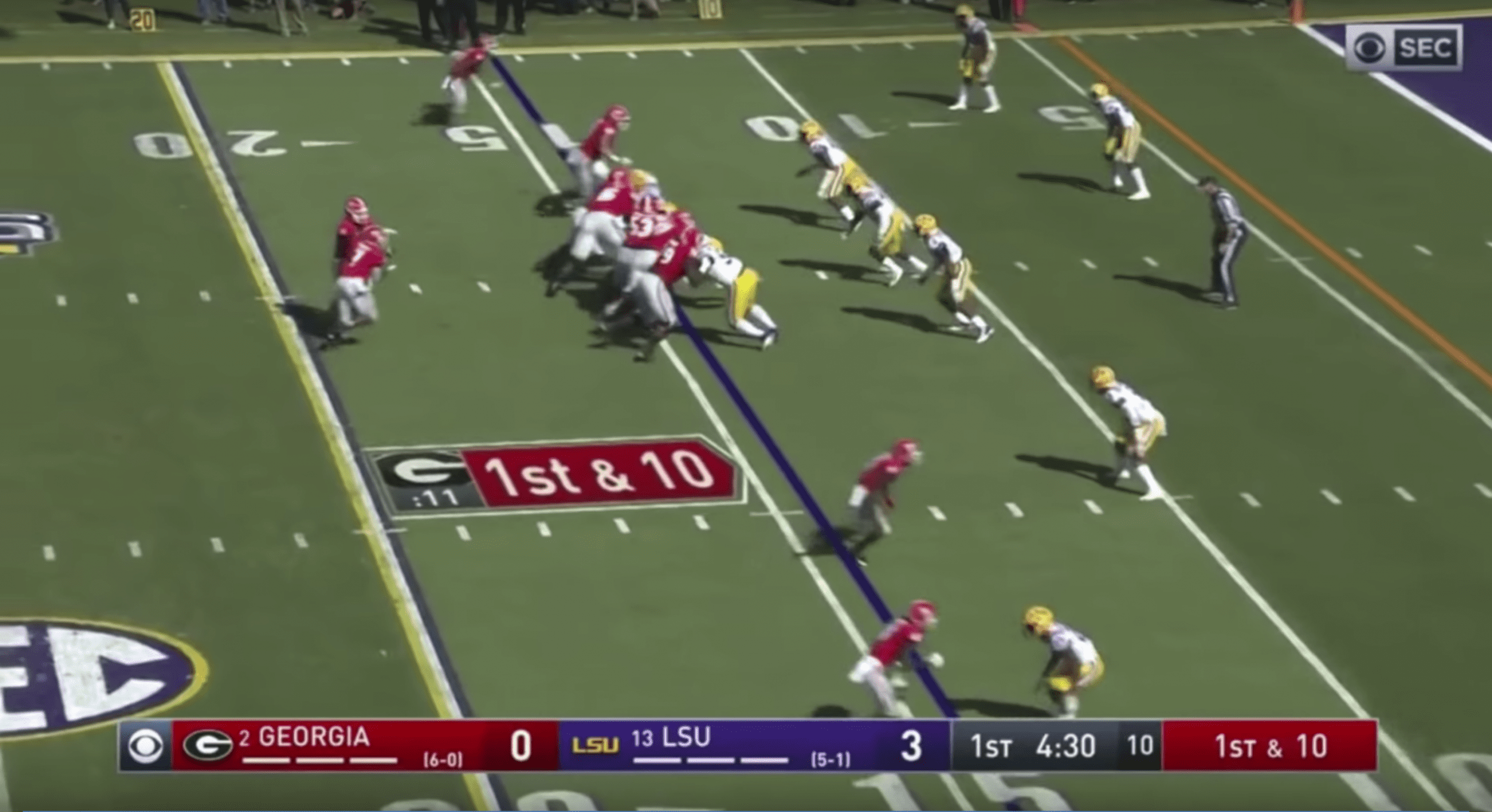 In this photo, Williams is at the bottom guarding one of the best receivers in college, Georgia’s Riley Ridley. Ridley plans on trying to break Williams’ cushion by pushing to his outside shoulder. However, he is unsuccessful as Williams kept the lowest pad level on the field and Ridley in front of him. Williams is well-known for his patient style, and it helps lead him to a great trail technique when he is playing in a Cover 1 defense. 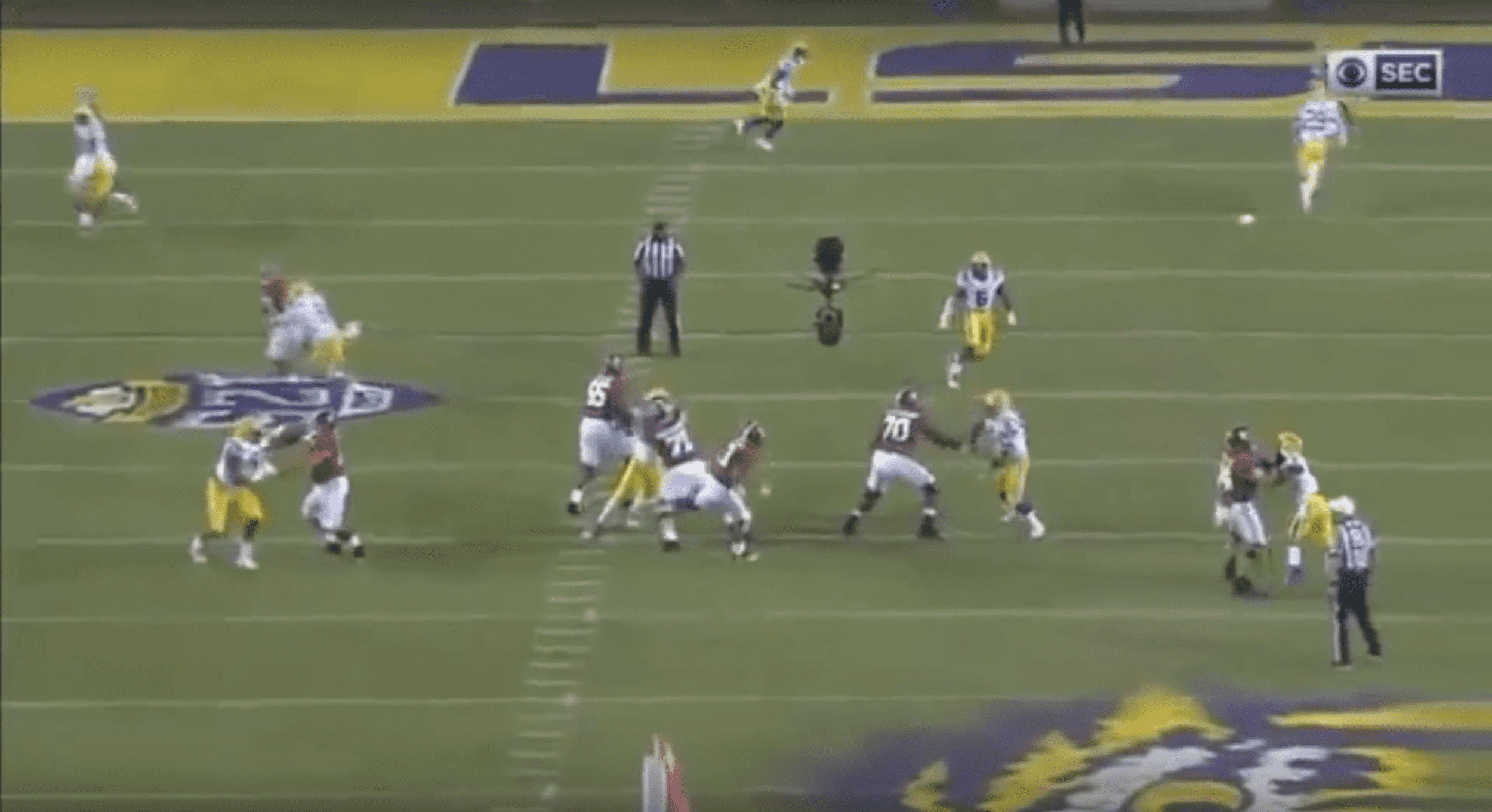 In this photo, Williams is in the top right near the SEC logo. Williams is in a trail technique where he keeps his near hand on his man’s hip and follows behind. He receives help from the safety up top, which leads to the receiver being locked up on any comeback or corner route by Williams or any post or streak by the safety. Williams keeps his eyes on his man’s hips then travels his eyes to his man’s head to read when the pass arrives. This allows his play-making and ball-hawk ability to come into play.

Williams turns his head when the receiver does and keeps a hand on his receiver’s hip to make sure he is in position. This man to man technique allows Williams and a few college corners to swat or in this case intercept the pass. The only options for the quarterback are to throw it out-of-bounds or underneath to the corner for an interception. However, nobody is perfect including Williams.

Williams had his roughest game against Alabama last year. That was not only because he faced Biletnikoff Award winner, Jerry Jeudy, but the Crimson Tide, in general, ran great rub routes and mesh routes underneath the linebackers.

In this photo, Williams is on the left of the 125 logo and was playing man to man on number 4, Jeudy. Williams got confused on what might have been a “bango” call where he would have switched defensive assignments with the linebacker. However, Williams is confused and caught up between the linebacker and two receivers. As a result, this allows two receivers to be open and Alabama to gain yards.

LSU did not run zone coverage often, but when they did, Williams did an above average job as well. Although this photo is not clear, Williams is in the top right with his hips open. While doing so, he kept his eyes on the underneath out route and the quarterback’s eyes as well as having a presence on his receiver in his zone. 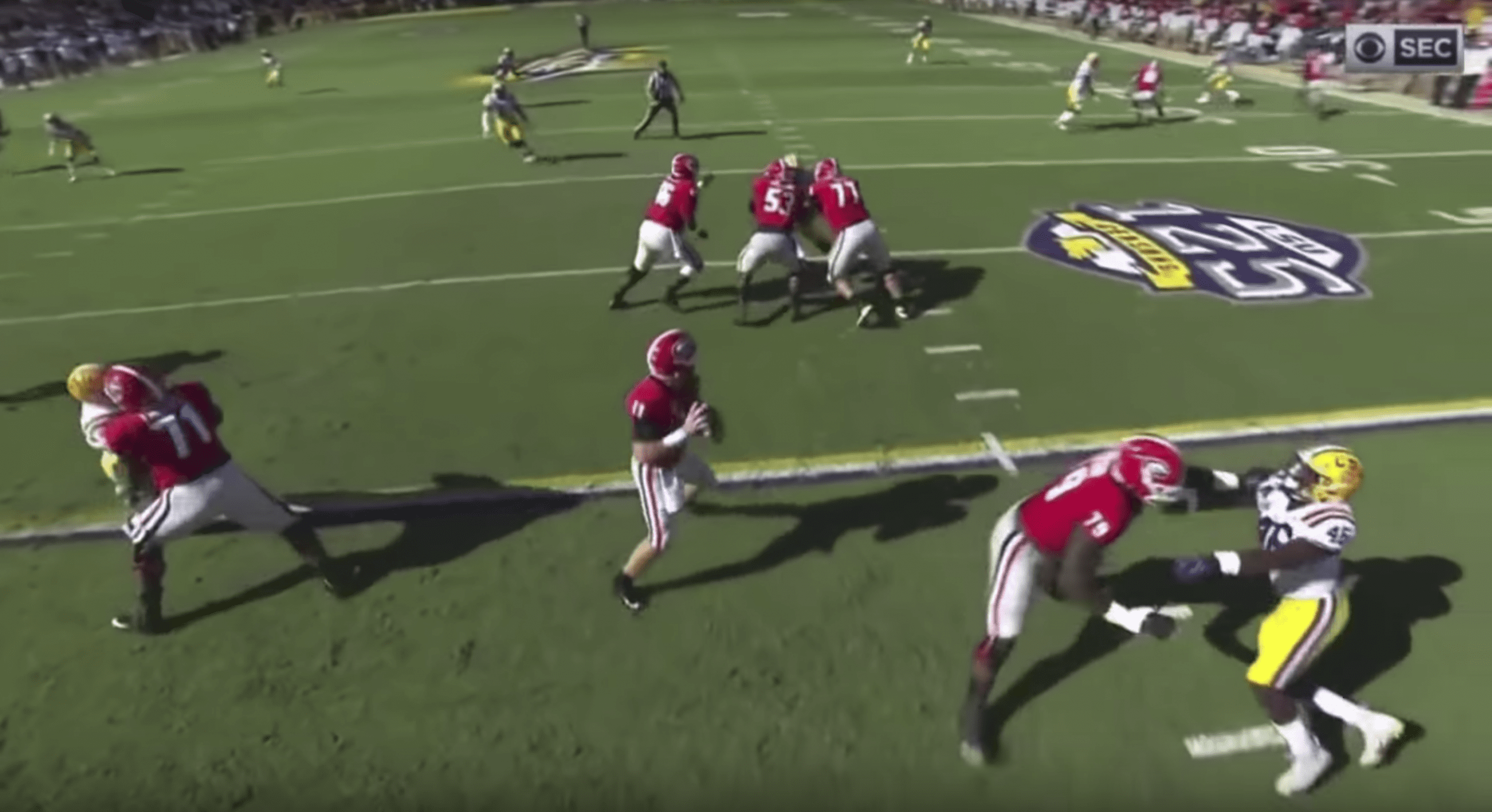 Williams was a decent zone defender, but not as good as Baker. Williams hesitates a bit still and slowly crashes down sometimes. This allows receivers to catch 5-yard curls and out routes. 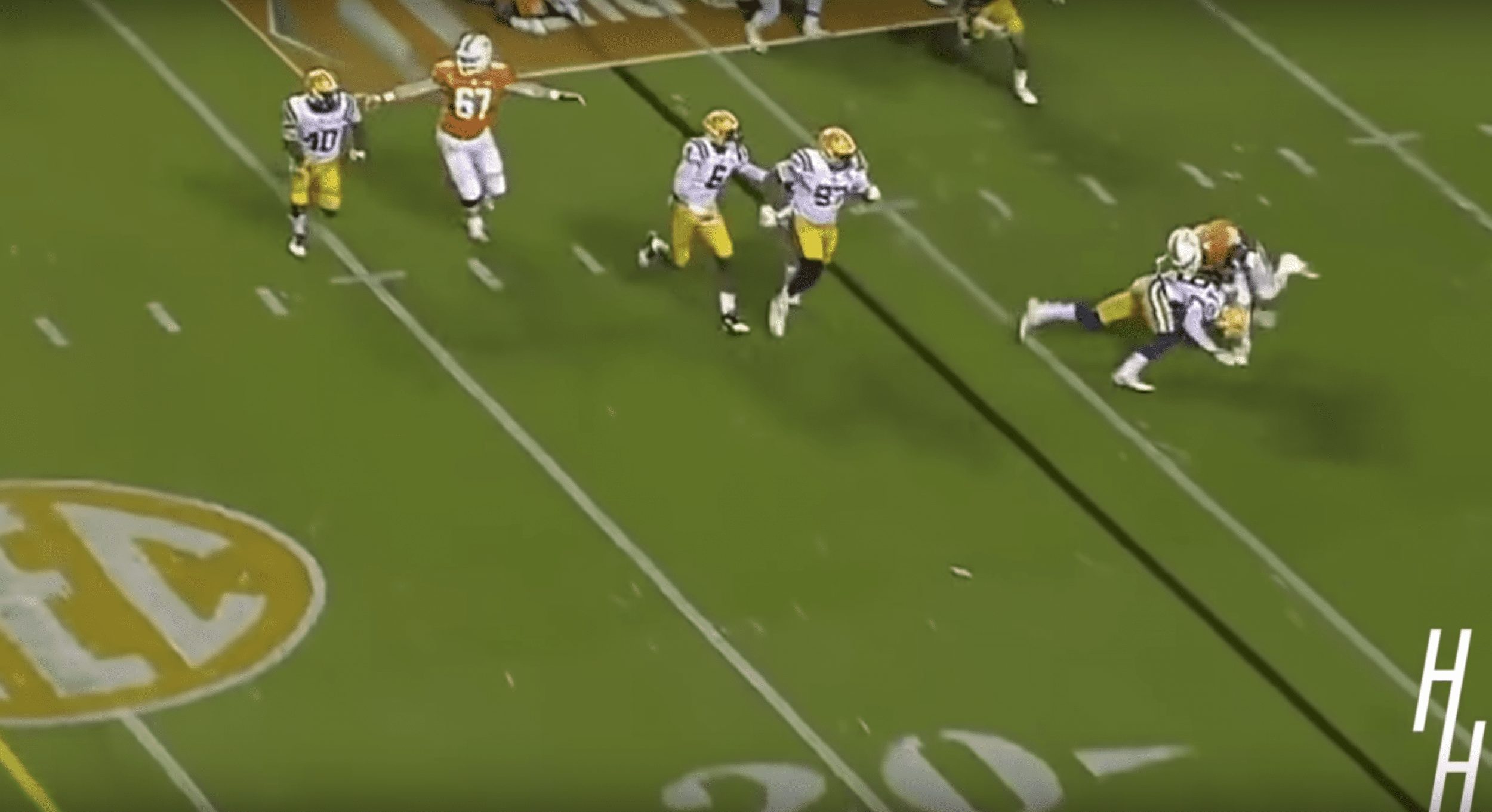 Williams has fallen to the ankle tackling approach that most corners in the NFL go to now. In this photo, Williams lowers his head and takes off to take out the running back’s ankles. Although he made the tackle in this play, this may be Williams’ biggest weakness. Bigger backs and receivers have bounced off his ankle wraps many times. This is also very dangerous since Williams lowers his head and is unable to see where he is hitting. This can lead to helmet on helmet contact and being hurdled by offensive players.

Williams is weak when it comes to run support. In this play and other plays this season, Williams struggled to break off of blocks. He is not quite a physical cornerback, so he struggles to create separation or break off receivers’ hands on blocks. On this specific play, Georgia’s Elijah Holyfield runs right past Williams due to Ridley’s block that runs Williams 15-20 yards from the line of scrimmage. 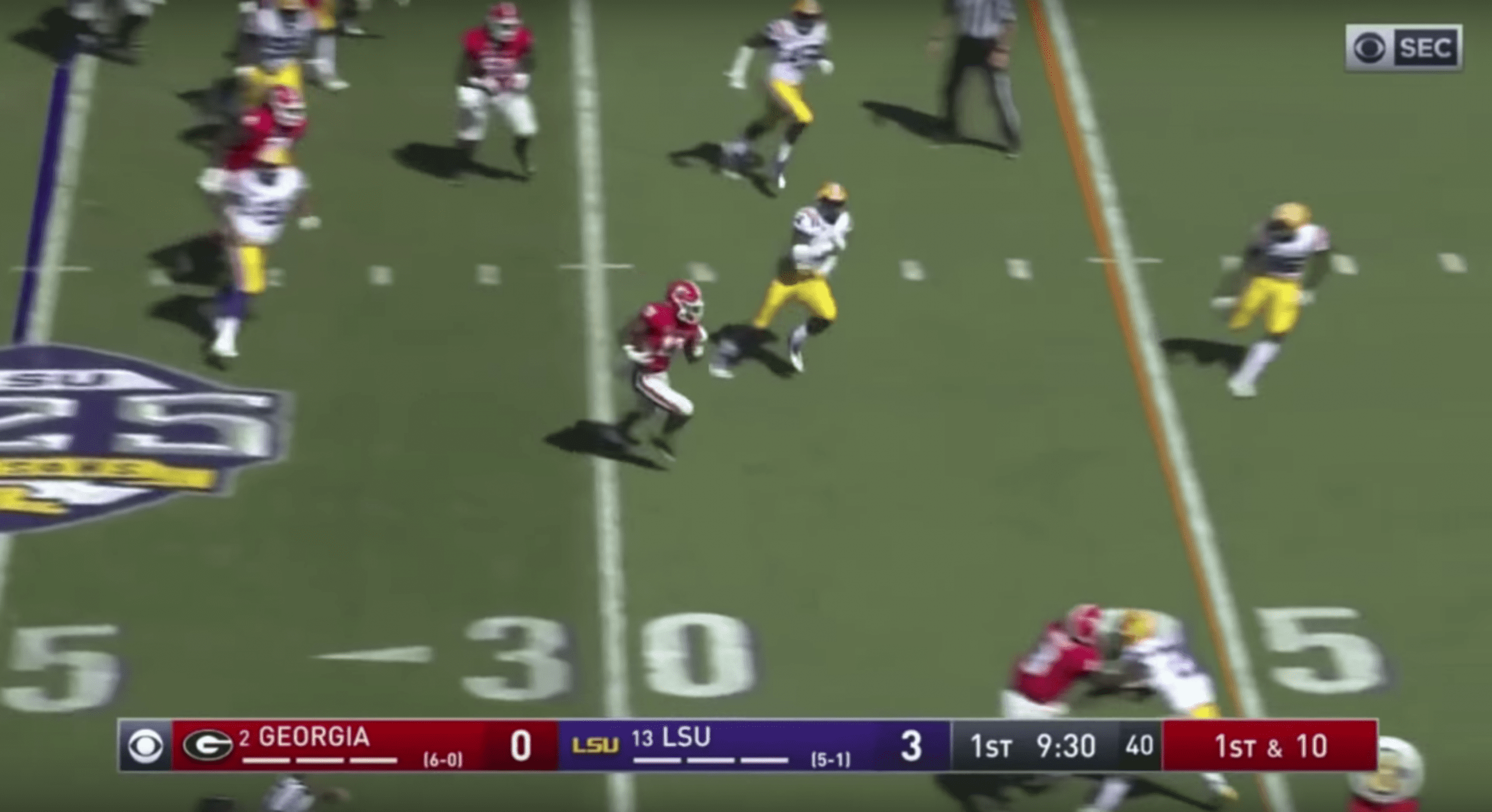 In the photo below, Williams has the perfect angle and shuts down the outside gap, but he stands still. Instead of crashing down Williams allows Holyfield to bounce inside and pick up about 10 more yards. However, he stopped Holyfield from bouncing outside and stuck to his lane forcing Holyfield to run into the defense. 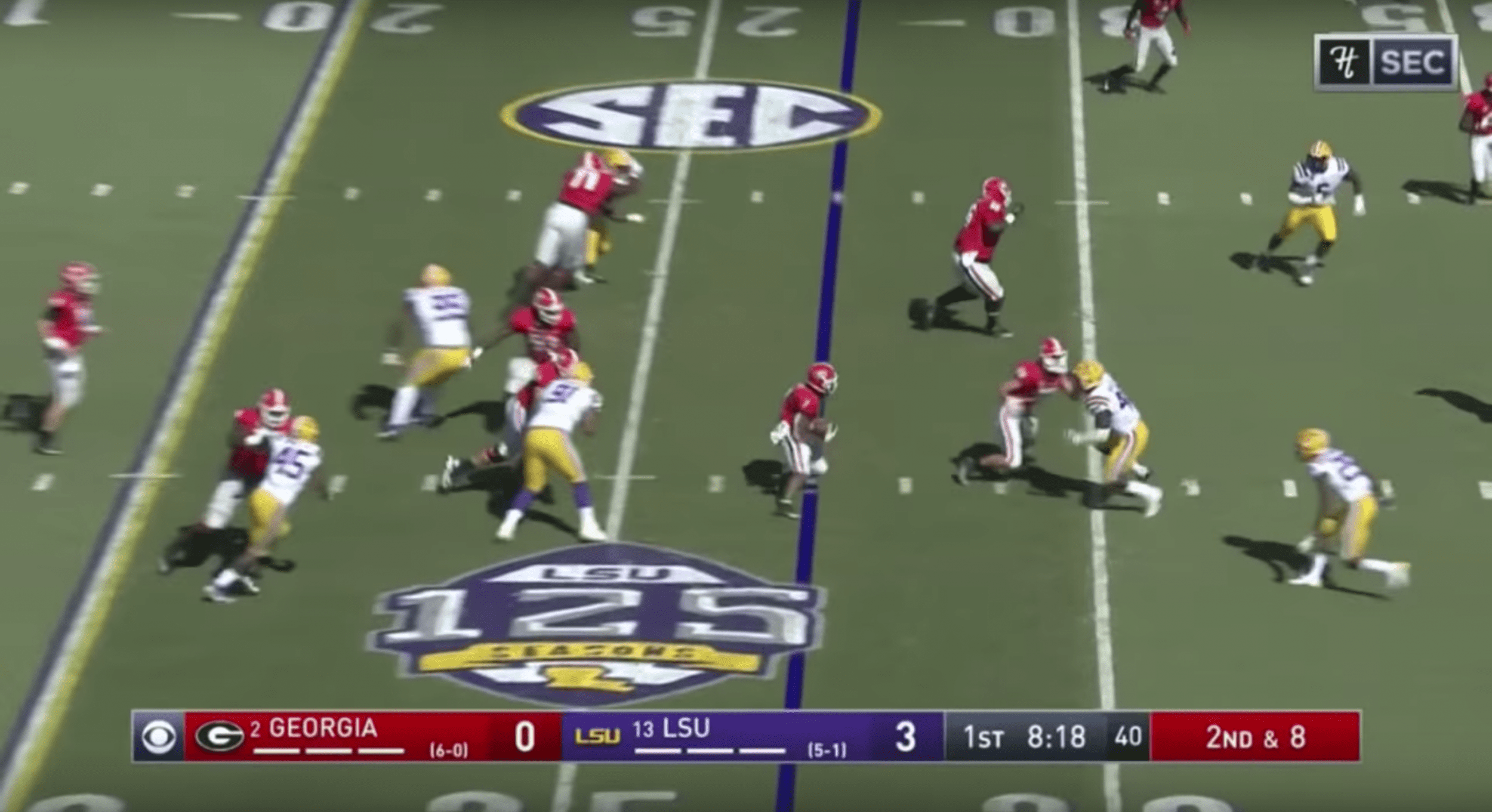 Williams will be a first-round pick who already has lots of pure talent. He will flourish on a man coverage heavy team and will be a decent ball-hawk. To become elite, Williams will need to build up confidence in his run support and become more physical.