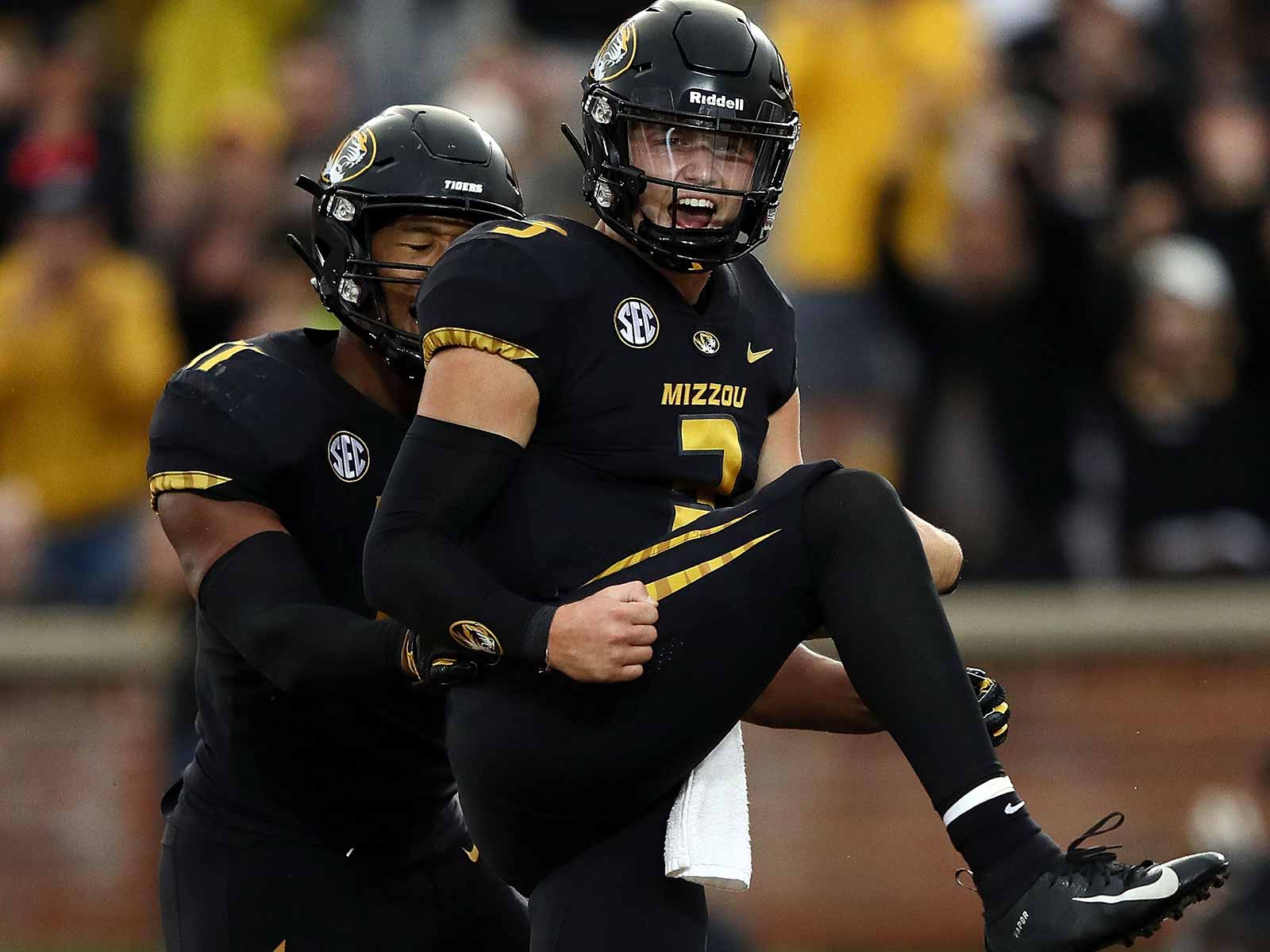 COLUMBIA, MO - SEPTEMBER 08: Quarterback Drew Lock #3 of the Missouri Tigers celebrates after crossing the goal line for a touchdown during the 1st half of the game against the Wyoming Cowboys at Faurot Field/Memorial Stadium on September 8, 2018 in Columbia, Missouri. Photo Credit: Jamie Squire/Getty Images
What's in this article? Click to show
The Denver Broncos should look like a much different team in 2019 with eight selections in the upcoming 2019 NFL Draft. The defense will need reinforcements all over following the loss of both Bradley Roby and Brandon Marshall. The team will also feature a new starting quarterback this season in Joe Flacco. But who else?
Round 1, Pick 10: Drew Lock, Missouri quarterback
Round 2, Pick 41: Erik McCoy, Texas A&M offensive line
Round 3, Pick 71: Dawson Knox, Mississippi tight end
Round 4, Pick 125: KeeSean Johnson, Fresno State wide receiver
Round 5, Pick 148: Daylon Mack, Texas A&M nose tackle
Round 5, Pick 156: Kendall Sheffield, Ohio State cornerback
Round 6, Pick 182: Sheldrick Redwine, Miami safety
Round 7: Pick 237: Jordan Brailford, Oklahoma State defensive end

The Denver Broncos should look like a much different team in 2019 with eight selections in the upcoming 2019 NFL Draft. The defense will need reinforcements all over following the loss of both Bradley Roby and Brandon Marshall. The team will also feature a new starting quarterback this season in Joe Flacco. But who else?

The 2019 NFL Draft will give the Denver Broncos a chance to get younger and more talented, both on offense and defense. A young signal caller could also be in the cards for the team moving forward. I have highlighted some players below that I believe will interest John Elway and company.

It’s no secret Denver is interested in quarterback Drew Lock. Lock is a mobile gunslinger in the mold of current Broncos general manager John Elway. The team has already seen Lock up close on a few occasions, including at the Pro Day, Senior Bowl and the NFL Scouting Combine. According Mark Kiszla of the Denver Post, Elway is “smitten with” Lock.

Lock has most often been compared to Detroit Lions starter Matthew Stafford, with great arm strength and underrated athleticism outside of the pocket. He can make all the throws expected at the NFL level. Even after the acquisition of Joe Flacco, the team remains very much in play for the Missouri product.

Another significant loss for the Broncos this offseason was the defection of former starter Matt Paradis to the Carolina Panthers. The team had hoped to re-sign their 4-year starter at the pivot but ultimately could not reach an agreement on a new deal. Paradis’ loss will be a big one, and replacing him will not be easy. Erik McCoy is one of the top centers available and would be quality addition at this point in the draft. He was a three-year starter for the Aggies, with great size and strength for the position. McCoy rarely gets overpowered by bull rushers and is a real mover of men in the running game. If the Broncos want to continue their running game success with Phillip Lindsay this season, grabbing McCoy would be a nice start.

The Broncos have not had consistent production in the tight end position since the departure of Julius Thomas in 2015. The team invested 5th round picks in back to back years at the position, selecting Jake Butt in 2017 and Troy Fumagalli in 2018. Neither player has shown to be a capable starter, so once again the team will look towards the draft for an upgrade. Dawson Knox was mostly a forgotten man at Mississippi. The junior TE recorded only 284 receiving yards and failed to score a touchdown in 2018. However, with fellow draft prospects A.J. Brown, D.K. Metcalf and DaMarkus Lodge fighting for targets, production was scarce for Knox. He figures to be a better pro than collegiate player as he boasts natural hands, prototypical size, and good speed for the position. Knox should step in and compete for the starting role right away.

The team did well to add two young and talented receivers during last year’s draft with rookies Courtland Sutton and DaeSean Hamilton. Sutton was a solid red-zone option that finished with four touchdowns, while Hamilton lead the team in targets and receptions after Emmanuel Sanders was lost for the season in Week 13. While both youngsters are expected to take a big leap forward in year two, depth is needed with Sanders still working his way back from the Achilles injury. Denver opts to select KeeSean Johnson from Fresno State with their pick here in the fourth round. Johnson ended his career as the all-time reception and receiving yards leader for the Bulldogs, passing Packers Pro Bowl receiver Davante Adams. He is a smooth route runner and great jump ball receiver. He should help the offense score more points in 2019.

The nose tackle position is a glaring hole for the Broncos heading into the 2019 NFL Draft. The team chose not to re-sign Domata Peko and will look to get younger player for the position this offseason. Therefore, Denver opts to select Texas A&M NT, Daylon Mack. Mack was a former five-star recruit for the Aggies who seemed to under-perform during his time in College Station. He only seemed to unlock some of his monster upside during the 2018 season under new coach Jimbo Fisher. Denver will look to continue and develop Mack into a valuable asset for the team. Mack is incredibly explosive for his size and will be the perfect anchor for the Broncos in the middle of their 3-4 defense.

The loss of Bradley Roby to the Houston Texans will be sorely felt for the Broncos this upcoming season. Therefore, the team opts to select another former Ohio State Buckeye in Kendall Sheffield. Sheffield was an early entry after starting only one season for the Buckeyes. He is a better athlete than football player at this point. However, he does have all the tools needed to succeed in the NFL. Sheffield suffered a partially torn pectoral muscle at the Combine, so his status now is up in the air. He is a quick player with great speed to follow receivers downfield. The downside is that he is not physical and will get bullied at times by bigger receivers. With Chris Harris Jr. likely to shift outside, Sheffield will probably get his first shot inside the slot. The slot corner position will give Sheffield the best chance to succeed in the NFL.

Another glaring weakness for Denver this off-season is the safety position. Justin Simmons has performed admirably for the team as a box safety. However, the team needs an option in the deep middle to pair with him. Sheldrick Redwine has developed a great deal during his four years at Miami. The former cornerback has solid coverage skills and decent range at the safety position. He has also proven to be a great leader on the field and a willing tackler in the running game. I believe that he will provide the perfect compliment to Simmons on the back end of the defense.

Denver hit a home run with 2018 first round pass rusher Bradley Chubb. Chubb should team with Von Miller to form one of the most feared pass-rushing tandems once again in 2019. With that said, there is little depth behind those two starters. Former first-round pick Shane Ray never developed as hoped and will leave via free agency. Shaquil Barrett will also depart after signing with the Tampa Bay Buccaneers this offseason. Jordan Brailford is a tweener with decent size and speed for a pass rusher. He has experience as a three-technique with his hand in the dirt. He was also allowed to stand up and develop as an edge rusher in 2018. Brailford will need to make his living as a situational rusher, as he appeared to get engulfed by bigger blockers at Oklahoma State.