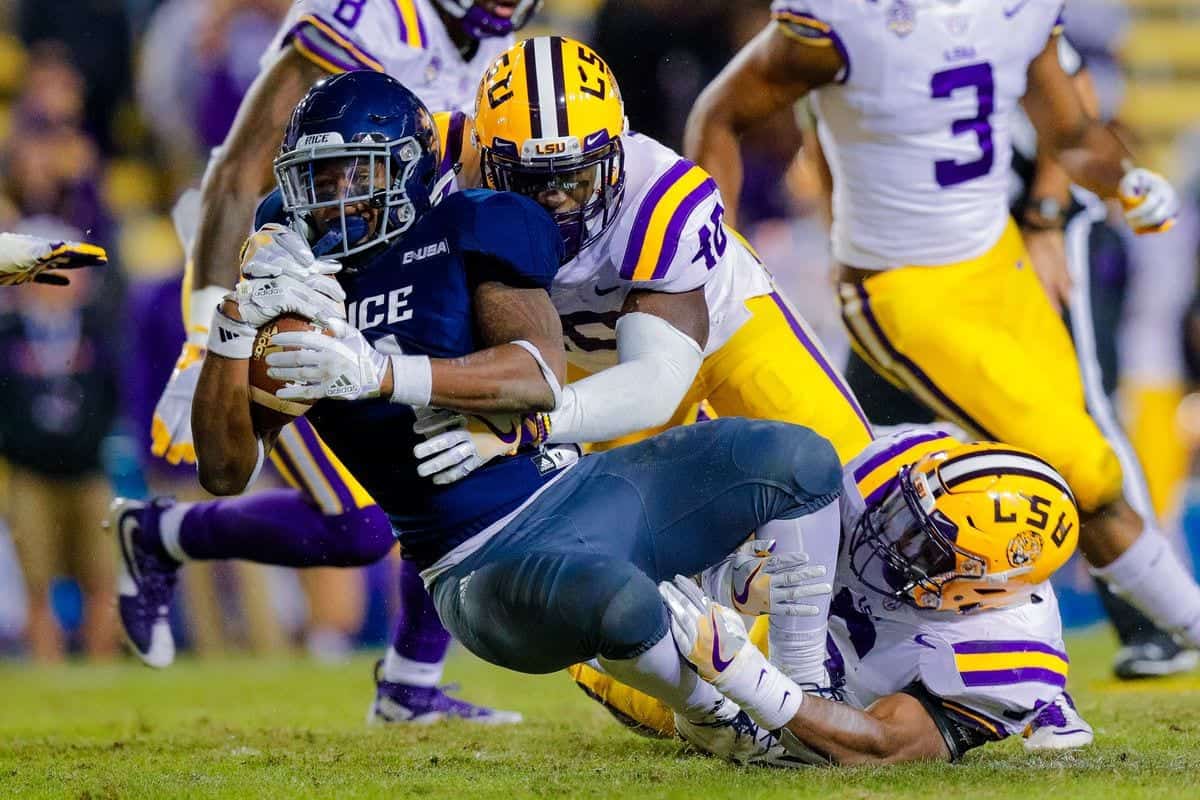 Photo Credit: USA Today
What's in this article? Click to show
With the 46th pick in the second round of the 2019 NFL Draft, the Cleveland Browns selected cornerback Greedy Williams from LSU.
Strengths
Weaknesses
How will Williams help the Browns?

With the 46th pick in the second round of the 2019 NFL Draft, the Cleveland Browns selected cornerback Greedy Williams from LSU.

Greedy Williams is a star cornerback from the SEC that boasts fantastic length and speed for the position. A four-star recruit, his freshman year was a redshirt year to due to the depth at the position. However, it didn’t take long to make an impression. Williams has eight interceptions in his career as a Tiger, along with 22 pass breakups. He’s a prototype man cover cornerback.

Greedy Williams has the ideal length for the position. He’s 6’2”, allowing him to match up very well with even the largest of receivers. His movement and mirroring skills are exceptional. He limits his wasted movement by maximizing his steps throughout his coverage. His backpedal and transition is fluid and smooth. Williams best trait is probably his ball skills, however. He’s a natural cornerback, able to attack passes as if he’s the receiver. He can start and stop on a dime, never slowed or delayed in reacting to passes.

Greedy is an ideal cornerback that can play both man and zone schemes. In man, his hand placement is stellar. Williams is able to stay on the receiver’s hip and limit the passing window. In zone, he’s intelligent and reads the quarterback’s eyes well. His burst to break toward the pass is excellent

Overall, Williams has two major limitations. First is his lean frame. He possesses the length for an ideal cornerback, but he’s very light at only 185 lbs. This small weight begs the question of if he’ll be durable enough to last in a physical league. It also can limit his ability covering the physical freaks at the NFL level, such as the Julio Jones or Deandre Hopkins type of receivers.

Secondly, and most glaringly, is Williams motor. After a stellar 2017 season, his last season flashed the promise he brings to the table, but he was not nearly as effective. He was seemingly disinterested on running downs, not actively trying to disengage his block. It’s a major question mark on a potential top cornerback if he’ll be mature. The spotlight and stardom may enhance this lack of motor with a desire to only make splash plays.

How will Williams help the Browns?

Williams is fortunate to be such a fluid mover in space. His balanced game in both man and zone will especially make him an immediate starter. He should contribute especially to man, where he can take advantage of great length and mirroring skills. Williams can also easily contribute inside, matching up with bigger slot targets. This is especially useful against teams that employ slot tight ends on passing plays.

In this article:Featured, featured, Greedy Williams