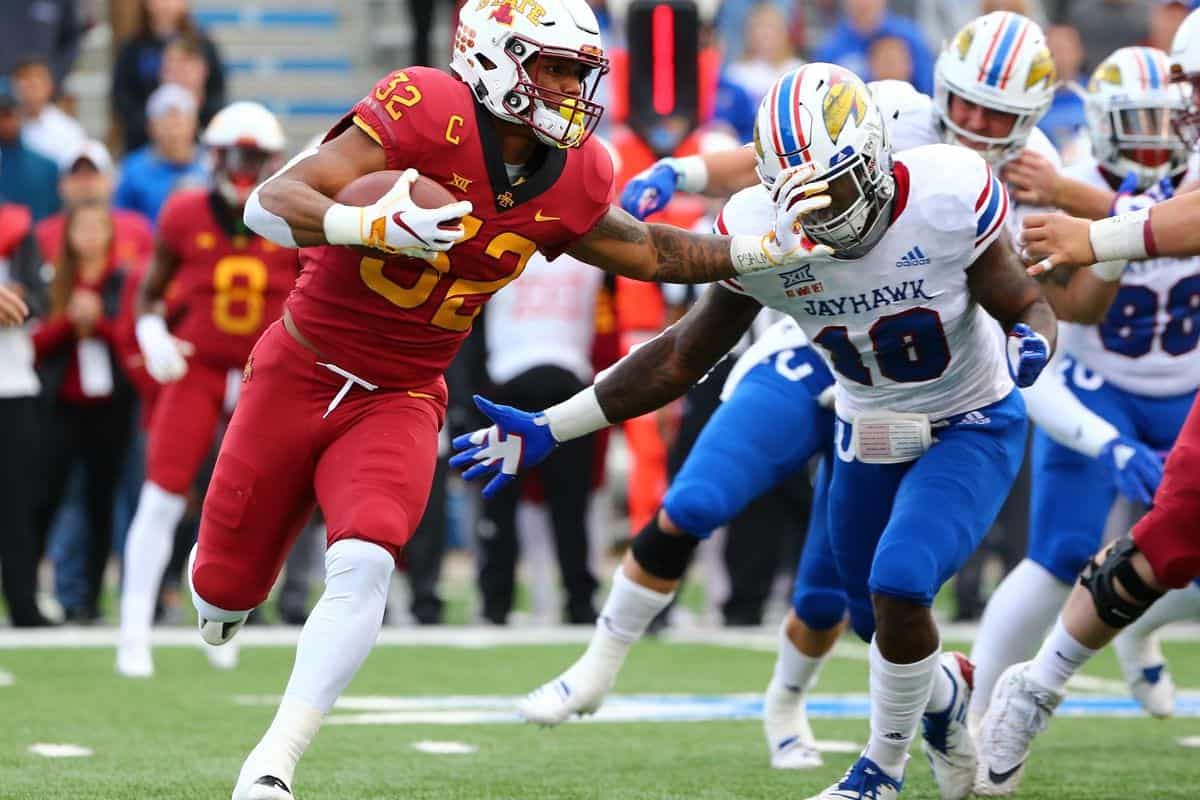 The Chicago Bears came away with one of the best running backs in David Montgomery this past weekend in the 2019 NFL Draft.

It wasn’t an overly exciting draft weekend for Chicago Bears fans. With only five total picks, however, the Bears made each one count. None will have a more significant impact than running back David Montgomery.

Montgomery, who led the Iowa State Cyclones backfield for the past two seasons, was one of the coveted running backs available last weekend. If you go back to December, he was a favorite to be the first running back taken in this year’s draft. That was before Josh Jacobs wowed scouts in the college football playoffs, and Miles Sanders won evaluators over with a perfect draft season.

Jacobs and Sanders went off the board in rounds one and two, respectively. Then Memphis running back Darrell Henderson. With the New England Patriots on the clock, and a running back-hungry team in the Buffalo Bills to pick after, General Manager Ryan Pace made his move. Jumping 14 spots to beat Buffalo to the punch, Pace swapped picks and made the phone call to Montgomery.

With the tenth pick in round three, Montgomery was selected by the Bears. Pace and company couldn’t have been happier.

Per the Mully & Haugh Show: “Everything just kind of fit together,” Pace said. “It’s a player we targeted. It’s a player that both scouts and coaches were on the same page with. When he was on the board and kind of falling down in the third round, that’s when we knew we wanted to be aggressive. We moved up 14 spots and got a guy we were all excited about.”

Looking forward to his rookie season

The void in head coach Matt Nagy’s backfield was apparent. Earlier this offseason, Pace traded running back Jordan Howard to the Philadelphia Eagles. It was a move many could see coming, shipping a young back away after an underwhelming season.

Montgomery, who ran for close to 3,000 yards and 26 touchdowns at Iowa State, will slide right in and immediately fill the void left by Howard. While Nagy has done wonders with quarterback Mitch Trubisky, his offense was missing a back that could close out games late in the fourth quarter. Not only will Montgomery take the pressure off of Trubisky but he’ll aid in securing games for the NFL’s third-ranked defense from 2018.

Joining Montgomery in the backfield is Tarik Cohen and Mike Davis. While Montgomery can hold his own as a prototypical three-down back, he’ll likely share touches with Cohen especially early in games. Keeping his legs fresh for the fourth quarter and late in the season will be essential to Chicago defending the NFC North crown.

Carrying over momentum from the 2018 season will pay dividends in 2019. It’s safe to assume Montgomery will be a favorite to compete for offensive rookie of the year.

The Bears will welcome Montgomery and fellow rookies to their rookie mini-camp starting this Friday. Nagy and others have a chance to see precisely what they have to work with this season as they fill out their 90-man roster for training camp in July.

In this article:Chicago Bears, Featured, featured