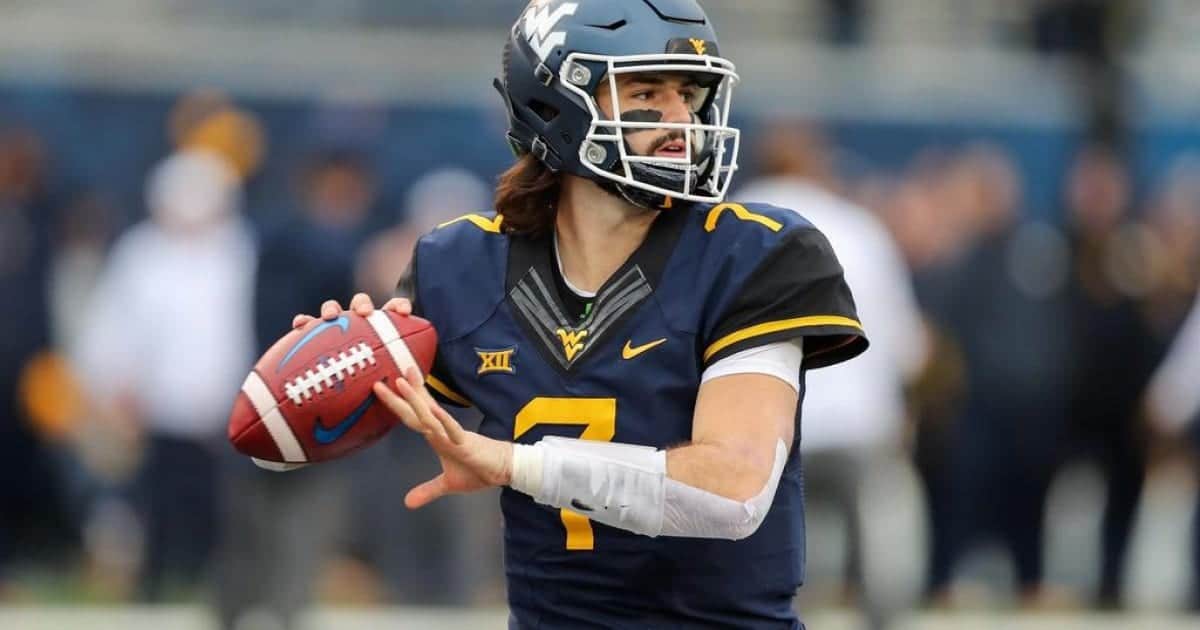 Photo Credit: USA Today
What's in this article? Click to show
With the 100th pick in the third round of the 2019 NFL Draft, the Carolina Panthers selected quarterback Will Grier from the University of West Virginia.
Strengths
Weaknesses
How will Grier help the Panthers?

With the 100th pick in the third round of the 2019 NFL Draft, the Carolina Panthers selected quarterback Will Grier from the University of West Virginia.

Will Grier is a dominant two-year starter for the West Virginia Mountaineers with massive statistics as one of the best quarterbacks in the country. Showing great promise for the Gators with a 5-0 career start, he was suspended for a year by the NCAA for a performance-enhancing substance.

He transferred from Florida and earned a starting spot with West Virginia. Grier has 71 passing touchdowns in that time, along with over 7000 passing yards in just two seasons. Many consider Grier a mature, leadership type that has the potential to take over for a franchise. This makes him the best option of the second-tier QBs in the 2019 NFL Draft.

Grier has excellent accuracy for a quarterback of his stature and arm strength. He consistently puts the ball where it’s necessary to avoid defenders for his receivers. He’s an intelligent processor, doing well with pre-snap reads. He often delivers passes before his receiver’s route is even finished. His confidence is excellent as well. He isn’t afraid to test defenses and pushes for the big throw rather than settle for the short area game. It’s a strength that can bite him back but pays off.

He also has plus mobility, something that is noticeable in his extension of plays on a regular basis at West Virginia. Despite not having great speed or timed agility, his reaction quickness is pretty good and he plays with urgency if he’s afforded some space in the pocket to escape.

Grier is limited by his arm strength. He cannot push the ball with the same velocity as some of his peers. It’s not a trait that is glaring in his game but is noticeable enough that late delivery on his passes jeopardizes the play for a turnover. His throwing motion is not easily adjusted either. He constantly needs to stop mid-run to deliver passes deep on the move. In addition, Grier suffers when under pressure. He’s easily influenced by frequent contact. He will drop his eyes early against a pass rush instead of standing tall to deliver strikes.

West Virginia spread offense helped Grier to mask many of these deficiencies. Grier is going to have a learning curve at the NFL level.

How will Grier help the Panthers?

Grier presents an immediate upgrade as a backup quarterback, starting in the case of injury. He’ll be an excellent locker room addition no doubt and has a chance to develop and learn before becoming a starter. This will provide him the chance to play an NFL defense in practice, and adjust to the speed of the game and varying defensive complexities. Grier could eventually grow into a solid, mid-tier QB.

The Panthers may not have needed to come out of the 2019 NFL Draft with a quarterback. Still, it’s not a bad move to put a solid option behind Cam Newton in case he succumbs to injury again. Grier isn’t someone who you’re going to hand the reigns over to permanently. However, he can fill in nicely in a pinch.

In this article:Featured, featured, Will Grier