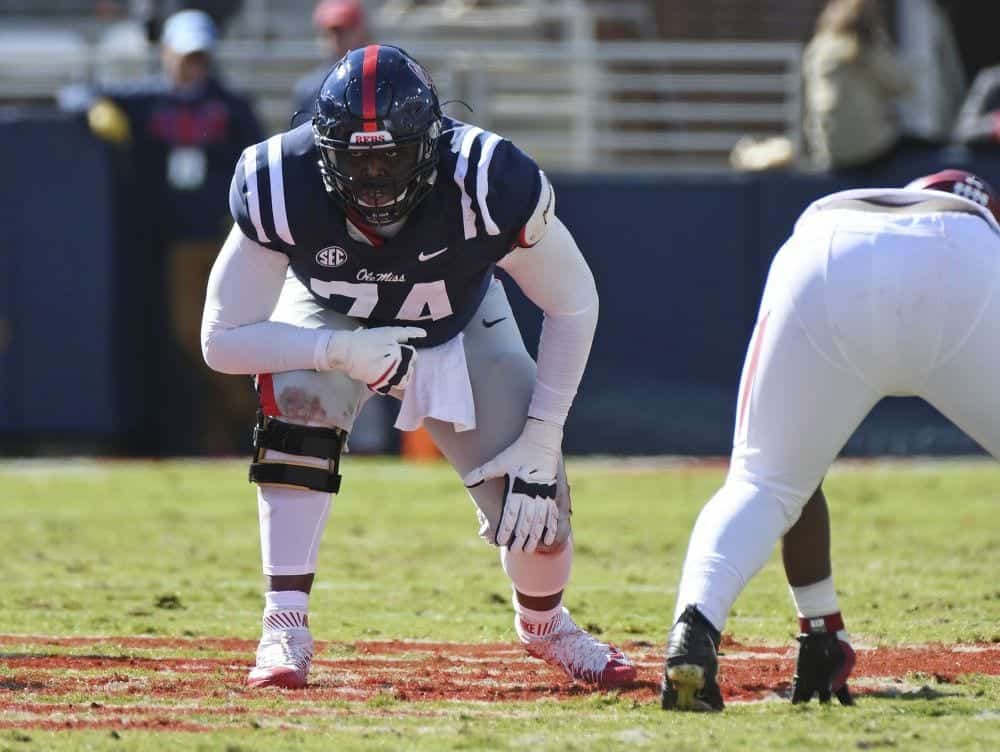 What's in this article? Click to show
With the fifth pick in the second round of the 2019 NFL Draft, the Carolina Panthers selected offensive lineman Greg Little from Mississippi.
Strengths
Weaknesses
How is Greg Little going to help the Panthers?

With the fifth pick in the second round of the 2019 NFL Draft, the Carolina Panthers selected offensive lineman Greg Little from Mississippi.

With the selection of Greg Little in the 2019 NFL Draft, the Carolina Panthers strengthen their offensive line. Little has been the starting left tackle at Ole Miss ever since he got the job a little over halfway through freshman year.

Since then, he has been apart of all kinds of accolades during his college career. He was named Second Team All-American by multiple sports websites after this past year. Little’s draft stock has fallen off a bit since the beginning of the draft process, but he is still a great player.

Little has been a starter for most of his college career. He has the experience teams look for and he played against NFL talent being in the SEC. When Little blocks he tends to stay lower than his defender. This gives Little the advantage since he has more power and leverage compared to his opponent. Due to him staying low when he blocks, he is a very good run blocker.

Having a good run blocking tackle is important so your team can run outside. At times when Little would face a very quick edge rusher he would cut block them to slow them down. Little knows what his strengths and weaknesses are and he knows how to slow down faster defenders. The amount of aggression that Little has is also impressive. Whenever he is blocking, whether it is a run or pass, you can see that he wants to win the battle.

Although Little is aggressive, sometimes he gets too aggressive. Little is a little grabby if he thinks he is getting beat or if he over pursues his defender. Multiple times he would have to have to try and stop his defender by holding him. He also had to make sure that he did not run past him. He also gets beat on the edge occasionally but if he improves his technique and/or gets quicker this issue will be a thing of the past.

His technique, as just stated is also not the best. When Little tries to run block at times he gets stood up by the defender causing him to lose his block. If an offensive lineman gets stood up by the defender, then the defender has all the control. Little’s biggest weakness is his inconsistency. At times, Little looks like a top tackle prospect in this years draft, at other times, he looks like a late day two or early day three pick.

How is Greg Little going to help the Panthers?

The impact that Little will have on the Panthers offensive line will be interesting to see. Little has the potential to be a franchise left tackle if he gets the right support system. Little can be one of the biggest steals in the draft. However, a team must coach him and teach him how to be consistent, The talent that Little has is almost unmatched in this draft and should not be overlooked. It will be up to the Panthers to make sure he pans out the way he should.

In this article:Featured, featured, Greg Little