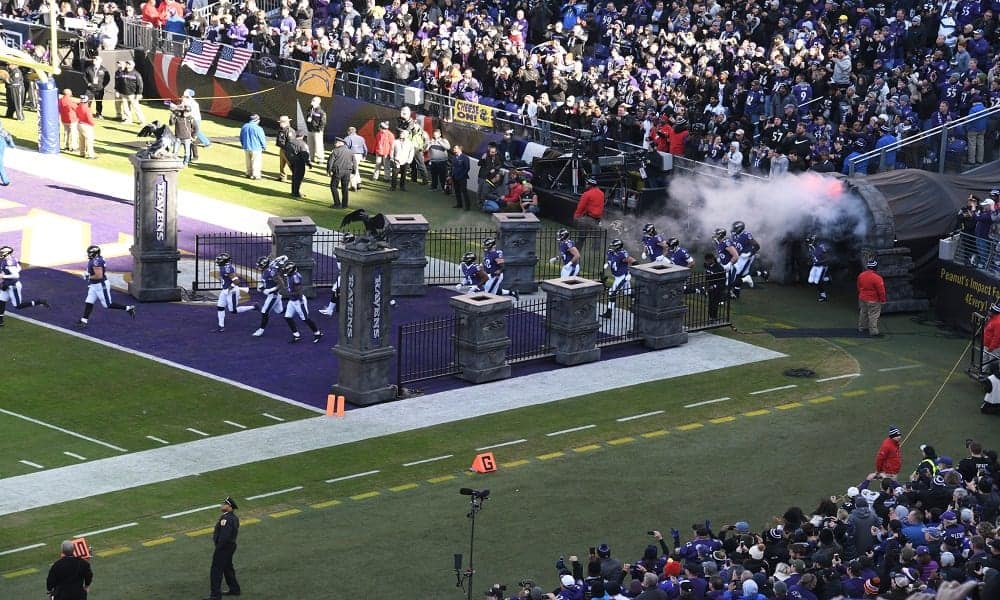 Photo Credit: Maryland GovPics
What's in this article? Click to show
The Baltimore Ravens started the 2018 season 4-5 before finishing 10-6 and winning the AFC North division. Baltimore had one of the league’s best defenses but their lack of offense proved too much to overcome in the playoffs. The Ravens will need contributions from their draft picks in order to stay on top of their division. Find out who I think the Ravens should select in the 2019 NFL Draft.
The Baltimore Ravens 2019 NFL Mock Draft
Round 1, Pick 22 Overall: N’Keal Harry, Wide Receiver, Arizona State
Round 3, Pick 85 Overall: Maxx Crosby, EDGE, Eastern Michigan
Round 3, Pick 102 Overall: Jaquan Johnson, Safety, Miami
Round 4, Pick 113 Overall: Justin Hollins, EDGE, Oregon
Round 4, Pick 123 Overall: Nate Davis, Interior Offensive Lineman, Charlotte
Round 5, Pick 160 Overall: Trayveon Williams, Running Back, Texas A&M
Round 6, Pick 190 Overall: Demarcus Christmas, Interior Defensive Lineman, Florida State
Round 6, Pick 193 Overall: David Sills V, Wide Receiver, West Virginia
Summary

The Baltimore Ravens started the 2018 season 4-5 before finishing 10-6 and winning the AFC North division. Baltimore had one of the league’s best defenses but their lack of offense proved too much to overcome in the playoffs. The Ravens will need contributions from their draft picks in order to stay on top of their division. Find out who I think the Ravens should select in the 2019 NFL Draft.

There has been a lot of player movement in free agency in the AFC North, brilliantly capsulized here in the AFC North Free Agency Recap. Meanwhile, the Ravens will also endure a changing in the guard in their front office as Ozzie Newsome retired and now his assistant Eric DeCosta is left with the task of defending their AFC North division crown.

Unfortunately, the Ravens experienced some significant losses during this past offseason:

DeCosta and the Ravens were able to make a few key additions to the roster in signing former Seahawk safety Earl Thomas. Thomas signed the richest deal for a non-quarterback in the franchise’s 24-year history. He will take over for Weddle as the anchor of the Ravens defense. Baltimore then went and solidified their running game by signing former Saints running back Mark Ingram. The former Crimson Tide star is durable and physical and scored seven touchdowns last season.

With the Cleveland Browns making a ton of offseason noise, and John Dorsey developing the Browns into a potential perennial contender, the Ravens need to continue upgrading their roster.

So how are the Ravens going to stay up with the Cleveland Browns, Pittsburgh Steelers and ahead of the Cincinnati Bengals?

I ran through the Ravens’ eight picks in the NFL Draft and conducted a mock draft using The Draft Network’s Mock Draft Machine.

The Baltimore Ravens are going to be a run-first offense as always. However, quarterback Lamar Jackson needs weapons. The Ravens found out in last season’s playoff loss against the Los Angeles Chargers that they can’t be one-dimensional. They have to keep offenses honest, take defenders out of the box, and build a balanced attack.

The Ravens need to provide Jackson with a go-to wide receiver. With their first pick of the 2019 NFL Draft, the Ravens satisfy that need with the selection of wide receiver N’Keal Narry from Arizona State. Harry is 6’4″ 213 lbs wide receiver who seems like a perfect fit as the X-receiver for the Ravens. He is a long, big-bodied possession receiver with a wide catch radius. Harry posted back-to-back 1,000+ yard seasons in 2017 and 2018.

Harry is balanced in all areas of the game and imposes his size on smaller defenders. He makes the tough catch and blocks well, which is essential in the Ravens run-first offense. The former Sun Devil will become an immediate starter in Baltimore’s offense. The ability to build chemistry with Jackson and to learn and grow will be essential to the growth of Jackson into an NFL-caliber starting quarterback.

The Ravens are without a second-round pick in this draft after they traded it away to move back up into the first round of the 2018 NFL Draft to select quarterback Lamar Jackson.

The team lost their talented trio of linebackers/EDGE players in C.J. Mosely, ageless Terrell Suggs, and the surging Za’Darius Smith due to free agency. This group needs an immediate upgrade for them to continue to rank as one of the best defenses in the NFL.

The Ravens select Maxx Crosby from Eastern Michigan. In 2018,  the two-time All-MAC defender Crosby was tenth in the nation in tackles for loss (19) and eighth in forced fumbles (4) and recorded 7.5 sacks. In 2017, Crosby rated as the third-best edge defender in the nation, according to Pro Football Focus. His competitiveness and on-field nastiness fit in perfectly with the Ravens defense.

Current Ravens safety Tony Jefferson makes a steep eight million dollar salary in 2019.  The Ravens would be wise to save themselves cap room and look for his replacement, and they found that in their second third-round selection in safety Jaquon Johnson from Miami.

Johnson, a four-year contributor at Miami, notched 92 tackles and two interceptions last year for the Hurricanes. Johnson helped Miami have the nation’s best pass defense in 2018. The Hurricanes allowed only 136.5 passing yards per game last season. He can line up in the slot, outside, and deep. In addition, he’s well adept at playing tight ends at the line and physical at the point of attack. His athleticism and coverage skills will make Johnson an NFL contributor on defense immediately.

Hollins is a freakish athlete, and he displayed that at the East-West Shrine Game, ultimately earning MVP honors. At 6’5″ and 245 lbs, he has the impressive athletic ability to inflict pressure from the edge and can even cover receivers in the slot.

Hollins produced 14 sacks, 36 tackles for a loss, seven forced fumbles and eight batted passes during his three years starting for Oregon. He isn’t a finished product as he needs to continue to add power and strength into his hands but does exhibit raw pass rushing ability. He should start as a pass rush specialist and hopefully blossoms into an EDGE starter.

Davis played primarily tackle during his time at the University of Charlotte, however, he projects to guard in the NFL. Adding Davis would be a tremendous asset in the running game. The 6-3, 316-pounder displays athleticism and strength at the point of attack. Davis will be able to maul defenders consistently in the power-based scheme of the Ravens.

Williams was the first-ever true freshman at Texas A&M to run for over 1,000 yards as he went for 1,057 yards in 2016. He leaves College Station after producing a tremendous junior season, where he produced 1,760 rushing yards with 18 rushing touchdowns.

He has experienced as a receiver, averaging 10 yards per reception. while displaying himself as a big play threat. With his passing game ability and versatility, he could be a third in a three-headed monster with newly signed Mark Ingram and last season’s surprise Gus Edwards.

Demarcus Christmas is a space eater between the tackles. He often draws double teams due to his impressive strength and tireless motor. He is not adept at rushing the passer. However, he was able to swat 13 passes throughout his career at Florida State, showing his heads up habits at the line of scrimmage.

Christmas will not be much more than a rotational nose tackle while using his 6’3″ and 294-pound frame in obvious running situations.

Sills was one of the most productive wideouts in college football. He teamed up with senior quarterback Will Grier for 15 touchdowns this past season, which led the Big 12. In his two seasons at West Virginia, he totaled 132 catches for 2,097 yards and 35 touchdowns. Those eye-popping numbers earned him a first and second team All-American in his final two seasons of college.

The 6’3″, 211-pound wideout has impressive ball skills and was outstanding in the red zone. While he will need to expand his route tree, Sills should play a significant role for Lamar Jackson in the Ravens offense.

With a draft like this, Baltimore would be en route to being a strong competitor for not only the playoffs but for the crown of their division. If at least most of these players live up to their promise, Ravens fans will be really happy to see an elevated Lamar Jackson, and a stout defense, making plays toward a double-digit win season.

In this article:Baltimore Ravens, lamar jackson