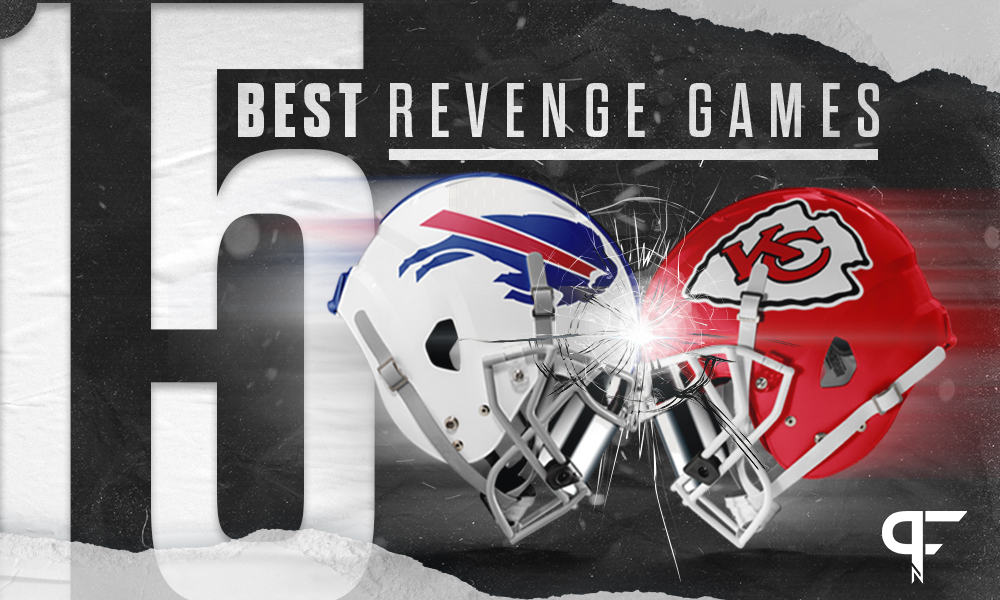 While the focus in the NFL often revolves around divisional rivalries, every NFL season also contains several revenge games that top the charts in terms of intensity. These games could be former teammates going head-to-head, or it could be two teams with a long history. Let’s take a look at the 15 top revenge games in the 2021 NFL season.

What are the top revenge games that see a player returning to his former home in the 2021 season?

Where else is there to start but with the return of Tom Brady to New England? This bout is sure to grab the headlines in the build-up to the event. Likely to be billed as a matchup between Brady and Bill Belichick, this game is an intriguing chess match.

If there is any head coach who should know how to devise a defense to stop Brady, it would be Belichick. On the contrary, if any QB knows the weaknesses in Belichick’s defensive game plans and schemes, it would be Brady. The moves and counter moves in this game will make for must-watch viewing.

DeAndre Hopkins and J.J. Watt did not leave Houston on the best of terms. Now, the Cardinals will host the Texans in the 2021 season. While most bad feelings between Hopkins and the Texans revolved around former head coach Bill O’Brien, the Watt situation came about following the hiring of Nick Caserio.

Both of these Cardinals will be desperate to show their former employers what they are missing. The last thing Houston needs in 2021 is for a team or players to have extra motivation to beat them.

Yet another revenge game featuring the Cardinals. However, this time it is a former Cardinal returning to the desert hoping to show his old team what he has left. Patrick Peterson recently made waves as the first player to take advantage of the new jersey rules. He will be hoping to honor that change with a pick-six in Arizona. Kyler Murray better watch out because Peterson will be looking to take advantage of any errant passes thrown in his direction.

The blockbuster trade that kicked this offseason into high gear was the swap of Jared Goff and Matthew Stafford. Shortly afterward, Brockers followed Goff to Detroit. Now, Goff will experience going against the likes of Aaron Donald and Jalen Ramsey in live game action for the first time. In contrast, Stafford will look to show the Lions that he is a QB capable of leading a team to a Super Bowl with the suitable investment and pieces around him.

We seemingly have a Rodgers’ revenge game against the 49ers every single year. After being manhandled twice in 2019, the Packers got some semblance of closure with a victory over the 49ers last season. Of course, there is a chance Rodgers does not even play in the game, given the current situation in Green Bay.

After five rollercoaster years in Tampa Bay, we could see Jameis Winston head back as the starting QB of their division rivals. The last time we saw Winston on the field for Tampa, he was setting a dubious record involving 30 touchdowns and 30 interceptions in the same season.

With Drew Brees retired and the Buccaneers reigning Super Bowl champions, can Winston produce the ultimate revenge on his former employers? Winston and the Saints will have their work cut out if they think they can outduel Brady and the Buccaneers twice in 2021.

Cam Newton landed in New England after being cut by the Carolina Panthers ahead of the 2020 NFL season. While his first season was not a roaring success, the Patriots have shown faith in Newton and elected to bring him back. He has the chance to redeem himself in New England. That redemption might include securing a victory over his former franchise and the head coach who released him.

This game is also a Super Bowl revenge game for the Panthers. In 2003, the Panthers made their first Super Bowl after being formed in 1995. It was Belichick and the Patriots who stood in their way on that day.

You might find a potential revenge game for Ryan Fitzpatrick in any NFL season, but in 2021, this game serves as an opportunity for both player and team to exert retribution. Fitzpatrick was electric as the QB of the Buccaneers and made some exciting plays when they were fighting for relevancy in the NFC South. Currently, he is hoping to be the veteran addition that can help carry a team loaded with talent on a deep playoff run.

Which revenge games in 2021 will see teams trying to avenge past defeats in key situations?

Week 2 of the 2020 NFL season saw one of the most remarkable comebacks in an NFL regular-season contest. With less than eight minutes remaining in the fourth quarter, the Falcons led 39-24. When the Cowboys failed a two-point conversion with just under five minutes on the clock, the game looked wrapped up. Five minutes left, and the Cowboys needing to score twice should have been the end. The Falcons had other ideas.

Already well known for their ability to collapse at any given moment — we will get to another one in a minute — the Falcons went into full self-destruct mode. When the Cowboys recovered one of the most bizarre onside kicks of all time, only one result looked likely. As time expired, Greg Zuerlein kicked the Cowboys to a 40-39 victory.

You would struggle to find a football fan, no matter how casual, who does not know this story. When a team collapses from a seemingly unlosable situation, it is notable. To do it in a Super Bowl makes it a headline that lives on forever.

This will be the second time the two teams have met since that day in February 2017. Adding gasoline to the fire for the Falcons is the fact they have not beaten the Patriots in this century. October 1998 was the last time Atlanta reigned victorious over New England.

The highlight of “The Tackle” is shown regularly in any historical NFL clip montage. Rarely does any NFL game come down to the final play ending at the one-yard line, so when it happens in a Super Bowl, it is even more awe-inspiring.

What makes that moment even more annoying for Titans fans is that it is the only time their team has ever made it to the Super Bowl. To get that close on your only trip to the biggest game is a pain that lives on until that demon is banished. A win over the Rams in 2021 will not banish those demons, but it just might bring a smile to the face of Titans fans.

Pretty much every game on the Patriots’ 2021 NFL schedule has some form of revenge attached. However, the Jaguars could be forgiven for feeling more hate than most towards New England. The Jaguars have never made it to a Super Bowl in their history. They have, however, made it to the AFC Championship Game three times.

On two of those occasions, the Patriots stood between them and a trip to the Super Bowl. Could starting Trevor Lawrence‘s career in Jacksonville with a victory over New England be a sign that the Jaguars are on the way to a Super Bowl in the near future?

Last season, with Goff playing hurt, the Rams were making a brave attempt at a Super Bowl run. That attempt was shut firmly down by the Packers, who dominated the Rams in a 32-18 victory.

The Packers’ organization appears to be in chaos, and the Rams have a new QB under center. That QB also happens to have a long history of battles with Green Bay. There is nothing Stafford would like more than to help the Rams remove the 2020 playoff loss from their mind.

During the 2020 NFL playoffs, the Browns were riding high. Coming off a historic playoff victory, they headed into Kansas City full of confidence. After a slow start, an injury to Patrick Mahomes opened the door for the Browns to have a shot to progress to the AFC Championship Game.

Yet, they fell short as Chad Henne came off the bench and dragged the Chiefs to victory. Had those final seconds turned out differently, it may easily have been the Browns heading to Tampa Bay to compete in Super Bowl LV.

This game always brings some heat with it for many reasons. When Peyton Manning was leading the Colts, these were the powerhouses of the AFC. Since his departure, though, the Patriots have regularly humiliated the Colts, often in the biggest moments.

Then there was the saga with Josh McDaniels as he did a u-turn on the Colts’ head coaching role to return to New England as offensive coordinator. With New England scrambling for their identity post-Brady, can the Colts exert some revenge on the franchise that has tormented them for a number of years?

Be sure to follow us on Twitter (@PFN365) to stay up to date with all things around the NFL beyond team-by-team opponents for the 2021 NFL schedule. Also, continue to visit Pro Football Network for NFL news and in-depth analysis concerning the 2021 season and beyond.